The Anatomy of Peace 4 – Justification or Peace, Which? 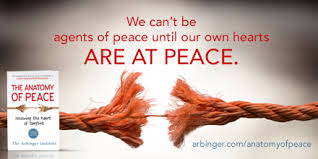 Many or most Metaphysical Christian churches conclude their service by singing “let there be peace on Earth and let it begin with me.” We, at the Unity Center of Christianity in Baltimore, are experimenting with opening our service with the Peace Song. And our opening Peace song is sung/played through three times—first, sung by a soloist; second, sung by the congregation; and third, played by the pianist as our congregants offer one another a sign of peace and embrace.

This contiguous three-fold opening of our service with the Peace Song sets our intention in gathering on Sunday morning: to declare peace as the standard by which we assess our spiritual growth and status, to affirm it as a congregation and to convey it to one another in an outward sign of peace. To say it again, the achievement of peace (peace of mind as well as peace in relationships) is our most important sign of spiritual growth and status. That’s unusual. Let me tell you why.

Peace, on the other hand, is certainly more biblical. Jesus did not say “Justification I leave with you; my justification I give you.” But he did say “I do not give to you as the world gives. Do not let your hearts be troubled and do not be afraid.”

What I am about to share with you comes from chapters 12, 13 and 14 in The Anatomy of Peace, a book which Iyanla Vanzant says “is more than a book to read or an idea to consider, it is a life raft for the countless many who are suffering in silence and drowning in fear.”

This crazed desire for justification is vitally important to us. As the book says, “we all grab for justification however we can get it.” We will figuratively sell our soul for a self-justifying story. We end up “in a box” from which we perceive people as objects. And we will “erupt whenever [our] justifications in the box are challenged or threatened.”

In other words, the primary theological goal of the western church—justification—winds up being the greatest hindrance to peace. How many wars have been caused by this incessant striving for justification of treating others as objects? So, borrowing from Emilie Cady, we might say that the theme of The Anatomy of Peace could be Justification or Peace, Which?

Chapter 14 is about half way through the book. The second half address how we can escape from our justifications. At the end of chapter 14 the writer says “Because grabbing for justification is something we do, we can undo it ... we can each find a way to a place where we have no need for justification at all. We can find our way to peace—deep, lasting authentic peace—even when war is breaking out around us.”

I will conclude this series here. This should have given you a sense of why this book is so important to those who wish to achieve a life of peaceful mind and peaceful action.

My Sunday lesson will elaborate on what justifications look like and how to become aware of them. With a little luck, I’ll have the audio out there later on this evening. And with a little more luck I’ll have video of the opening of our service with the three-fold rendition of the Peace Song. Click “Read More” to access them. I’ll come back to the second half of The Anatomy of Peace with a sermon series later on this year. We need to move on to African American History month and then on to Lent.

May peace begin with you and I.

Sunday lesson given at Unity Center of Christianity in Baltimore, Maryland, February 2, 2020.

Download a PDF copy of this page: The Anatomy of Peace 4.pdf