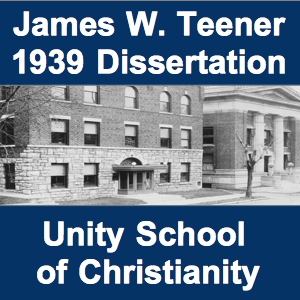 Let's assume that two early Christian histories have been discovered in an archaeological site. One is dated about 50 years after the time of Jesus and the second one is dated 75 years later. In addition, the earlier history makes some very controversial assertions, some of which conflict with the established teaching we have inherited. And let's also throw in the fact that the earlier history isn't quoted much if any in the later histories. Which is more valuable? Which is more interesting? Which may have a unique perspective? Most historians would place more value on the earlier history.

Such is the case with the 1939 dissertation on Unity School of Christianity, written for the University of Chicago Divinity School by James Teener. Thanks to the care of the Unity Library and the dedicated work of Margaret Garvin, our transcriber, Teener's work is now full-text searchable and publicly available for download. Here is what one well-known and well-respected Unity scholar has said about the Teener document:

WOW!!! The Teener transcript brings Teener's work to a much more readable, and now, searchable form than ever... His observations about the early Unity movement's attitude toward mainstream Christian churches, about the sectarian/denominational character of the movement, and about Charles and Myrtle Fillmores' differing perspectives, at least in the beginning days of the movement would certainly be among the issues worth discussing. Unity's relationship with Christian Science is another intriguing issue. And I had forgotten the differing information about the naming of the movement.Teener slaughters one of Unity's sacred cows with that one, doesn't he?

Anyone with interest in Unity should read James Teener's 1939 dissertation on Unity for several reasons:

It is a comprehensive, understandable and easy-to-read explanation of both the history and teachings of Unity up to 1939. Casual readers gain a useful overview of how Unity came into existence and what it taught during it's first fifty years.

It is a scholarly and dependable resource. All of the assertions made in the 200+ pages of this document are footnoted. In the transcription given here on TruthUnity, I have kept the footnotes on the same page as the text and in many cases I have provided hyperlinks to the original source documents. It is my hope that the accessibility of this document and the ability to drill down to source material will attract scholars to the study of Unity.

It's findings and criticisms of Unity are fair and supported by the evidence. Since academic research is built on critical inquiry, Teener's assessment of Unity can seem judgmental for the casual reader. But his findings are well documented and revealing. Unity is strengthened by any honest assessment of its teachings and its past.

But the great value in this document, and the reason I chose to re-publish it here, is because it is written from the perspective of the orthodox Christian point of view. Teener submitted this to the University of Chicago Divinity School, an orthodox Christian seminary, and therefore he needed to convey Unity's teachings to the orthodox reader.

Why is this important? If we in Unity have any interest in attracting the 75% of Americans who identify themselves as Christian then we need to speak their language. When we're asked about Unity's teachings about Jesus, the Bible, Sin and Heaven, it is no longer acceptable to give trite answers. We need a solid explanation of metaphysical Christianity that is comprehended by those trained in orthodox language. In my opinion, James Teener has done a wonderful job of explaining Unity's teachings in a language that is understandable to most people today.

We're aware of the rapid growth of those who say they have no religion. What we know is that about two-thirds of them are not irreligious, but just unchurched.[1] And they are unchurched because they hold religious beliefs that are not compatible with the orthodox faiths. May Google and Bing bring them here. May the spiritual seekers of the world find here, at last, an honest assessment of a religious movement that tries to show a better way.

Who transcribed this document?

Thank you, Margaret Garvin, for transcribing 200+ pages of text. Your work will bless scholars and Unity students for many years to come.