The Master Key To Every Kingdom: Grace

We are profoundly pleased to present to the thinking and reading public this our first venture in the publication of a metaphysical work. The Master Key To Every Kingdom: GRACE, by Crichton Russ Boatwright, elucidates one of the main doctrines of the Christian religion from a new angle in such a way that it should be more understandable to the average layman. As far as we know, no previous work with this approach has ever been published in the field of metaphysics.

When we first considered publication of this book we were impressed with the advance comments on the manuscript by well-known Truth ministers and teachers and particularly by the notice from a prominent New York business man. These endorsements of the writer’s new and profound yet clear and penetrating explanation of this heretofore veiled-in-mystery subject were, to say the least, heartwarming to prospective publishers.

Readers will note that this interpretation of Grace is based mainly on the Roman Catholic Church definition of it as given by Webster. However, the writer, a Unity minister in New York City, has not been a Roman Catholic, has not studied Catholicism and is holding no brief for or against the doctrines of that Church in general.

This Unity interpreter of Grace spoke from time to time for over two years on the subject matter of this book, which came inspirationally, before learning from an interested student that it was a metaphysical explanation of the Roman Catholic Church definition of Grace. The inner meaning and manner of availability of “God’s mercy” as given here may or may not agree with any mystical interpretation by Roman Catholics themselves. This applies also to the interpretation of the Catholic “Prayer To The Sacred Heart” which appears in the second part of the book. It is the metaphysical meaning that came to the author’s mind when a copy was received from another student.

It is the practice of Unity, in a spirit of true Catholicism, to be happy when it finds in many different faiths points of agreement with its own revelations of truth. Therefore the Webster definition of Grace from the Roman Catholic Church conception has been included in this metaphysical explanation of “God’s Favor.” The Protestant Religions’ conception of it is used too, and inner meanings of some well-known Protestant hymns are indicated.

In this same spirit of true Catholicism, the publishers, who also do not happen to be of the Roman Catholic persuasion, are happy to present this book.

Perhaps Charles Fillmore, Co-founder of Unity and President of Unity School of Christianity, best expresses our own feeling about the need for this work. Mr. Fillmore writes in part that the author “has done well boldly to rescue this obscure yet divine power called Grace and restore it to the light of spiritual understanding.”

May the reader, from the writing of Crichton Russ Boatwright, find a new, rich field of thought for expansion and growth through Grace. 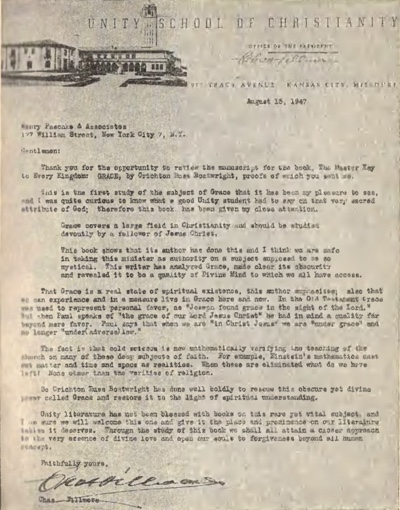 Thank you for the opportunity to review the manusctript for the book, The Master Key to Every Kingdom: GRACE, by Crichton Russ Boatwright, proofs of which you sent me.

This is the first study of the subject of Grace that it has been my pleasure to see, and I was quite curious to know what a good Unity student had to say on that very sacred attribute of God; therefore this book has been given my close attention.

Grace covers a large field in Christianity and should be studied devoutly by a follower of Jesus Christ.

This book shows that its author has done this and I think we are safe in taking this minister as authority on a subject supposed to be as mystical. This writer has analyzed Grace, made clear its obscurity and revealed it to be a quality of Divine Mind to which we all have access.

That Grace is a real state of spiritual existence, this author emphasizes; also that we can experience and in a measure live in Grace here and now. In the Old Testament Grace was used to represent personal favor, as “Joseph found grace in the sight of the Lord.” But when Paul speaks of “the grace of our Lord Jesus Christ” he had in mind a quality far beyond mere favor. Paul says that when we are “in Christ Jesus” we are “under grace” and no longer “under adverse law.”

The fact is that cold science is now mathematically verifying the teaching of the church on many of these deep subjects of faith. For example, Einstein’s mathematics cast out matter and time and space as realities. When these are eliminated what do we have left? None other than the verities of religion.

So Crichton Russ Boatwright has done well boldly to rescue this obscure yet divine power called Grace and restores it to the light of spiritual understanding.

Unity literature has not been blessed with books on this rare yet vital subject, and I am sure we will welcome this one and give it the place and prominence on our literature tables it deserves. Through the study of this book we shall all attain a closer approach to the very essence of divine love and open our souls to forgiveness beyond all human concept.

"He that hath my commandments, and keepeth them, he it is that loveth me: and he that loveth me shall be loved of my Father, and I will love him; and will manifest myself unto him.” —Words of Jesus, St. John 14:21

"I do not make void the grace of God: for if righteousness is through the law, then Christ died for naught.” —St. Paul, Gal. 2:21

THE MASTER KEY TO EVERY KINGDOM:
GRACE

From talks given during the past four years, based on study of the words and life of fesus and the writings of St. John and St. Paul

Part One
Understanding And Receiving Grace

The Grace of God.

What a lovely sound the words have.

What promise of beneficent love and mercy they hold forth to us.

If we understand and accept His Grace the promise is completely fulfilled.

When we have seen someone express great love, we have thought, “How wonderful is that person! How filled with true compassion.” We may have wished that we too could show forth something of this inner splendor. It is then we have seen and admired God’s Grace in action.

Speedily sickness has been transfigured into health, sadness has turned into gladness, misunderstanding has dissolved into accord, failure has become success, a grieving heart has been comforted with joy and peace, despair and lassitude have vanished in the glory of soul vim and vigor, uncertainty has changed to sure wisdom and mind rest, “out of the blue” homes have been found where apparently there was no home, opportunity for satisfying work has revealed itself in unexpected ways, means of supply have manifest where no means were visible before. When we have seen these happenings we’ve exclaimed joyfully, “Surely a miracle of Grace!”

Yet have we ever stopped to wonder, “What is Grace? What, really, is it? Of what does it consist? Is it available to all? And how do we receive it?”

Or has “grace” been something that we’ve only said at table?

If we have paused to ponder about Grace, have we given up and let it go at last as a mystery, a veil, not ours to tear asunder?

If so, we have missed the mark of the perfection and the joy of living that, under Grace, may and should be ours.

That there is such a thing as Grace, our intuition tells us. Intuition is direct knowing from the God-Spirit within the soul. Why should there ever flash intuitively into the mind the way of Grace as the way out of difficulties if there is no gleaming radiance of Grace to beckon us? Of the worth of “dumb (inarticulate) intuitions” as compared to that of rationalism, human reasoning, William James in “The Varieties of Religious Experience,” writes:

“If you have intuitions at all they come from a deeper level of your nature than the loquacious level which rationalism inhabits.”

To comprehend that which intuition reveals is, with the majority of persons, to increase their faith in the intuitional revelation of the kingdom of heaven at hand under Grace.

Conscious understanding of what Grace is, from whence it comes, how it is received by man, makes inner enlightenment about it articulate, and so for most people more to be trusted.

Many persons have inarticulate inspirations about this free gift of God but do not trust them. Human reasoning, objective appearances and past experiences argue against the validity of these glimpses of truth. The general spiritual development of such people is not strong enough to inspire sustaining faith in their flashes of Holy Spirit discernment. For them, a clear intellectual comprehension of the why and how of Grace should remove it from the realm of distrusted insight as something “too good to be true” and bring it into the field of everyday provable usage. As St. Paul determined to do, they will then be able to pray “with the spirit,” and “with the understanding also.”

Grace need not be accepted on blind faith. To anyone of open mind, its existence, nature and availability can be proved by known laws of consciousness.

For those who have not experienced even flashes of inner enlightenment, the explanation of Grace in this book may provide a reason to seek from within themselves spiritual verification of its existence and thus to discover the master key to the kingdom of heaven on earth.

God’s Grace is equal even to the establishment of world peace. It can soothe the fevered brow of man, dissolve his fears and so release him from the impulse to war against his brother.

What else but Grace can do this? What progress of science, intellectual philosophy, the ethics of “an eye for an eye and a tooth for a tooth,” has availed to provide the answer of heaven manifest on earth? As the perfect solution to our problems in international, national and private spheres there is but one way out: to understand, find and live God’s Grace. As we do, we shall prove the beneficence of the “hand over fist” way of living—the merciful and loving Hand of the Master over the mailed fist of contentious human might.