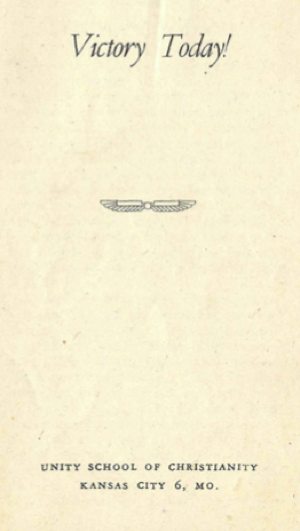 THE letter V has been an important symbol throughout this war. The British adopted it first as a symbol of hope and resistance. On the radio they have played many times the opening bars of Beethoven's triumphant Fifth (Vth) Symphony, three short notes followed by a long note. Patriots have scrawled on walls and sidewalks everywhere three dots and a dash, the Morse code symbol for V. By holding up their hand with the index and middle fingers forming a V, soldiers have wished one another good luck. Lately of course there has been the tremendous interest in and speculation about V Day.

A day will come when the government will announce that the victory has been won throughout the world. On that day there will be rejoicing here in Silent Unity as elsewhere. We shall give joyous thanks to God.

But on the day before V Day we shall have given thanks too. And on the day after V Day we shall give thanks again. What day passes that does not have its victories, if one has eyes to see them! There has not been a day since the war began when we have not from hearts full of praise given thanks for "victory now."

We have not been looking forward to a future V Day. We have realized that victory is not something that suddenly happens, the event of a single day. Victory is an unfoldment. Victory is a feeling, a faith, a spirit, an attitude toward life. And every victory emerges out of victories won previously.

Today is V Day! Be assured of that. Today the victory is won. Now is the victory, right now.

Because we know that peace as well as victory is being achieved right now, we give thanks every day for peace too. We use this prayer:

"IN THE NAME OF THE LORD JESUS CHRIST WE PRAY FOR AND DECREE A PERMANENT PEACE, UNITING ALL THE NATIONS OF THE EARTH IN A LEAGUE OF JUSTICE AND RIGHTEOUSNESS, IN WHICH THE LIFE, LIBERTY, AND LOVE OF GOD SHALL BE PARAMOUNT."

We ask you to use this same thought. This war is only an outward phase of the great spiritual struggle that can end only with the triumph of the Spirit of God in man. We who know the power of prayer, who believe in prayer, who practice prayer belong in the forefront of this struggle, for here physical force is of no avail. Here the battle must be won with spiritual weapons.

There is a consciousness of victory on which events depend. This is our part: to shape this consciousness, to work on the invisible heart of things, to lift men's spirits and to fire their minds with hopes beyond the human, with courage to dare divinely even past hope, and with the faith and wisdom to transmute their highest visions into living facts.

This is our part: to league together in the peace of God the lonely islands of men's souls, beaten by icy separating seas of fear and ignorance and circumstance, to make men see that as all the islands go to make the earth, so all men are united in one God.

Today is V Day on the spiritual front too. Each day we see more and more people throwing off the dominion of old false beliefs, awakening to their divine destiny, working for a better life for themselves and others, learning that they are sons of God and, as such, heirs not to ignorance and want and pain and hatred and death but to His kingdom and His kingdom way of life.

Today is V Day for thousands upon thousands of people who have won the victory over themselves and over circumstances, over ill-health, over inharmony, over lack, over fear, over every form of bondage and limitation. The reports of this V Day come across our desks in a flood of letters from people everywhere who are seeking and learning how to make every day a V Day in their life, to live victoriously.

Today can be your V Day. Give thanks right now for victory now! Do not look forward to a V Day in some far-off future. Make today your V Day. Rejoice in the victory you are winning right now.

The Unity of Nations

At this time the world has come to one of the crucial points in its ongoing. The nations are drawing together to construct the framework of a peace that can mean centuries of order and progress for the world. The nature of this peace depends on the wisdom and understanding shown by us and by the leaders chosen to represent us in the conferences and meetings that are being held.

We cannot pray too diligently about this peace. We cannot do too much to build a consciousness of agreement, harmony, and mutual understanding.

According to the Kansas City Star, Eric Johnston of "the United States Chamber of Commerce, said recently that "the things which nations and economic groups have in common — the things which should, but don't hold them together — are much greater than the things which divide them. The great mischief in human relations, he pointed out, has been derived from the tendency to emphasize the differences and overlook the common interests."

The United States, Great Britain, Russia, China, France, and all the other nations have the same ideals and purposes, however differently they may express them. All people are children of God and all nations are seeking peace, justice, freedom, and prosperity — oneness with God and His good. Different backgrounds may cause differences of viewpoint, but the great aims and the divine heritage are common to all.

If we can keep in the forefront of our minds that which we have in common with other nations, we shall be able to resolve the differences, just as the principals in a marriage who have much in common are able to understand and reconcile their differences and create a happy and prosperous union.

We cannot do too much to realize and to help others to realize the points of agreement between nations. Let us pray that we may all realize the true unity of nations and that we and our leaders may have the wisdom and understanding needed to build on that unity a lasting peace. Let us think and talk unity. Let us pray for unity.

A prayer that we in Silent Unity have been using to bless the leaders of the governments of the nations of the earth is the following:

"THROUGH THE CHRIST MIND YOU ARE UNIFIED IN THOUGHT AND PURPOSE FOR THE GOOD OF ALL HUMANITY."

We should like for you to join us in using it.

We see the unity of nations established; we see them bound together in the peace of God.