Unselfishness As a Factor In Body Sustenance 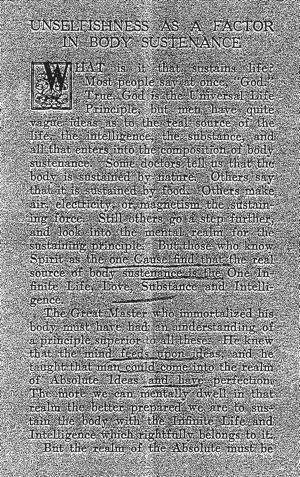 What is it that sustains life Most people say at once, “God.” True, God is the Universal Life Principle, but men have quite vague ideas as to the real source of teh life, the intelligence, the substance, and all that enters into the composition of body sustenance. Some doctors tell us that the body is sustained by nature. Others say that it is sustained by food. Others make air electricity or magnetism the sustaining force. Still others go a step further and look into the mental realm for the sustaining principle. But those who know Spirit as the one Cause find that the real source of body sustenance is the One Infinite Life, Love, Substance and Intelligence.

The Great Master who immortalized his body must have had an understanding of a principle superior to all these. He knew that the mind feeds upon ideas and he taught that man could come into the realm of Absolute Ideas and have perfection. The more we can mentally dwell in that realm the better prepared we are to sustain the body with the Infinite Life and Intelligence which rightfully belongs to it.

But the realm of the Absolute must be attained through the formation of a new consciousness. This in its ultimate includes an entire change of character. The personal self must be enlarged t the universal standard. The question of the right relation of self is a delicate one, because there is both an inner and an outer adjustment to be made. We find Jesus Christ saying, “He who hath seen me hath seen the Father,” and “All power is given unto me;” but he said also, “The Son of man hath not where to lay his head.” Who is it makes these apparently contradictory statements, and from what standpoint did he make them? Jesus had an appreciation of himself as an individual ego, and at the same time he recognized his dependence upon the Universal, the Father. Men enlarge their sphere of consciousness by knowing themselves in this twofold character.

The man who limits himself to what he seems to be, becomes crystallized n a limited sphere of consciousness. This is personality. Infinity is the one and only end of man’s possibilities the personality hides the real man. The meaning of personality is a “mask.” The real man is the Son of God. Limited concepts of man build up limited states of consciousness, the sum of which is called “personality.” We make a distinction between the personal and the individual. The personal is partial attainment, by the individual of his perfection. The real individual is the Son, the Christ, the image and likeness of God in all men. So man, if he looks upon himself as the Son of God, enlarges his consciousness and the personal goes through a dissolution and re-formation. There is an effacement, a letting go, or as symbolized in the life of Jesus, the crucifixion of self, a doing away in consciousness with the limited ideas of man and his relation to God.

Jesus Christ took on himself all the limitations of the flesh and entered into the life of man that he might prove man’s power over all limitations. He took upon himself all the ideas prevalent in the race consciousness, yet he did not make them realities in his life He had the right idea of the true man, and he began the enlargement of his consciousness upon that absolute foundation. That was the rock upon which he built.

All men have the divine ideal Self, and it is expressed by them to the extent that they recognize it and efface the little, personal self. Clinging to the little things of life holds man in limitation. Every man is according to his thought, and it makes a difference whether the thought is from the intellect or the heart. If it is from the heart, it has substance; it is enduring. If from the head it is a thought image without substance, and soon passes away.

If you would get out of the consciousness of the personal man into the Christ man, take up a daily practice of entering into the Universal Mind. If yo thing of yourself and your life as temporal, you cannot et into the Life Universal. If you put a thought of limitation upon your life, to that extent you limite your life consciousness and expression. If you believe that you are of the dust, yo build a material body that will return to dust. It all depends upon you. Think of your whole organism as one with Universal Substance, and the Divine Substance will enter into and sustain your body.

It is written, “We are a temple of the living God; even as God said, I will dwell in them and walk in them.” How does god walk in you? God is the universal Life, Intelligence, Substance and the more you affirm and claim this Life and Intelligence and Substance the more you appropriate and enlarge your consciousness, and the personal is gradually lost in the Universal.

Then if we would have our bodies sustained as Jesus had his sustained, we must enter into the same place of consciousness that he entered. Think of yourself in a large way and the little things of life will lose interest for you. See all things from the large viewpoint. Instead of mere man see yourself as Diving Being. The only difference between gods and men is in comprehension. Men have the power to comprehend and appropriate all they have imagined possible with God. People say, “That is a good theory; but will it demonstrate?” It will, if you discern the Truth and enter into it with your whole heart.

Men of wealth find that it is easier to make money than it is to dive it away. Laying hold of substance is a dangerous thing to those who do not know that all belongs to the Universal. It is lie a live wire; you can’t let go as easily as you can lay hold. Th efforts of Jesus in letting go of human consciousness caused him to sweat blood. If he knew the transitory nature of things why did he thus suffer in letting go of them? Because he came into the same consciousness we are in. He took hold of the live wire of human thought. Do you know that human thought is the most alive thing there is? You will find that it means something to let go, bu tif you want the unlimited you must let go of the limited; if you want the Universal you must let go of the personal. If you want more body sustenance, you must let go of self. Begin on things you are most selfish about—family, food, passion, or whatever it may be. All have some dominant selfish characteristics. Take up your cross and wipe out the little self. Say “I am the Son of the living God.” This will plant the fulcrum that will life you into the all-Power.

Many fail to lay hold of their divine inheritance because they think they have not the power. All such should begin right now to claim their power and dominion. In the very beginning man was given dominion, and if he will take it in faith it shall be his. Say, “I have faith in myself, in my divine manhood. The power of the Almighty, the power of the One Infinite Mind, walks in me and talks to me. It is my God, and I am its people.” Talk to yourself like that, and our consciousness will enlarge and your lungs will expand, and you will feel the very thrill of the larger Life.

Let us cease to confine yourselves The only prision man knows is that which he makes with his own thought. Unbind the man. Speak to Lazarus and loose him; take off the grave clothes and let him go free. Beware of the man who lives in the flesh; the ral man is Spirit. Insist that yo are th eSon of the living God, and you shall be sustained unto life eternal.