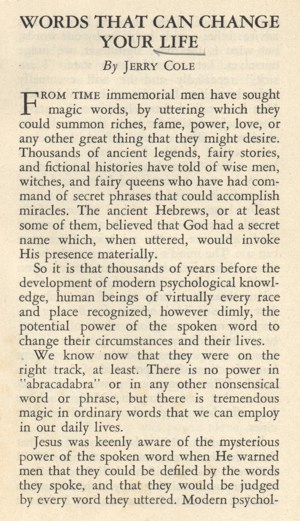 WORDS THAT CAN CHANGE YOUR LIFE
By Jerry Cole

From time immemorial men have sought magic words, by uttering which they could summon riches, fame, power, love, or any other great thing that they might desire. Thousands of ancient legends, fairy stories, and fictional histories have told of wise men, witches, and fairy queens who have had command of secret phrases that could accomplish miracles. The ancient Hebrews, or at least some of them, believed that God had a secret name which, when uttered, would invoke His presence materially.

So it is that thousands of years before the development of modern psychological knowledge, human beings of virtually every race and place recognized, however dimly, the potential power of the spoken word to change their circumstances and their lives.

We know now that they were on the right track, at least. There is no power in "abracadabra" or in any other nonsensical word or phrase, but there is tremendous magic in ordinary words that we can employ in our daily lives.

Jesus was keenly aware of the mysterious power of the spoken word when He warned men that they could be defiled by the words they spoke, and that they would be judged by every word they uttered. Modern psychology has proof of the absolute logic of His advice: other people judge us by our words; but what is far more significant, we judge ourselves. Let a healthy man state, "I am sick," repeatedly and he will eventually judge himself to be sick, and he will be sick. Men have talked themselves into the grave. Conversely, optimistic men, stricken by the shadow of illness, have talked themselves into radiant health. Financially poor men have talked themselves into material prosperity by way of new and better-paid jobs, or greatly increased business.

The human mind, within whose unfathomable recesses dwells each man's share of God's presence, is the mightiest force man can use. The mind's influence upon the body, upon other minds, upon circumstances, upon itself, is nothing short of fantastic. Conscious thought is only one of its attributes. Just as the visible portion of a floating iceberg represents only one ninth of the iceberg's total dimensions, so does our use of human consciousness and thought represent but a fraction of the potential of the human mind. What enormous powers lie secret within that vast unknown? Modern science has afforded some valuable and positive clues.

It is within this subconscious area that faith dwells. A man may say to himself, "I believe!" and yet, if his belief is shallow, superimposed, existing only in his conscious mind, it proves to be inoperative; it doesn't work. It has failed to reach beneath the conscious surface of his intelligence; it is not rooted in the depths of his subconscious mind, where he truly lives and has his power.

Jesus, as had others before Him, referred to this subconscious human kingdom as the "heart." An Old Testament wise man said, "As he [man] thinketh in his heart, so is he." Jesus stated, "Where your treasure is, there will your heart be also."

A man cannot deliberately think "in his heart," yet what he thinks in his heart determines his life, his circumstances, his health, everything that concerns him and his fellow men. A man can have faith effectively only if this faith dwells in his heart, but how can he implant it there?

Too often men mistake an emotion for inner conviction. Stirred by a sermon, written or spoken, that drives home to him the power of faith and of love, the man tells himself: "It is true! It is wonderful! I believe!" At the time his heart seems to be stirred, but it is not necessarily stirred into creative, forceful action. It may not even be really convinced; it may, in fact, remain virtually untouched. It is as though a man attempted to turn on an electric light by will power alone, without touching his hand to the switch.

This is what has been finally discovered: the subconscious mind, the "heart," can be and is reached by the words we speak. Every word we utter, or entertain in silent thought, is a directive that cannot be ignored. Thus, a man who says in his conscious mind, "I have faith," automatically sets up within his heart a mechanism that also can say, "I have faith."

If this man would make this statement and no other, there would be this one great directive and one inevitable result. The man would have faith, and his faith could move mountains.

But today he says, "I have faith." and an hour or a day later he countermands his statement by saying, "I am afraid," or "What's the use?" or "I don't feel well."

Faith is incompatible with fear, and one statement countermands another. It is as if a man has with one hand fumbled with the light switch to turn it on; then with the other he has fumbled with it to turn it off.

Consistency is the keynote to success. "If therefore thine eye be single," said the Master, "thy whole body shall be full of light." Let your statements, the words that you utter aloud or in thought, be of a pattern: positive. Each of these positive words is like a light switch. You will understand this implication best if you have ever played a pinball game. Your pinball machine has a panel with many numbers; you win the game when your catapulted metal balls have made the necessary contacts and all of the numbers have been lighted on the sloping board. Then your pinball victory is complete. In the great game of self-mastery and the quest for absolute faith the victory is yours when your statements, constantly repeated, have, as it were, lighted up all the lights in your heart so that your whole body is full of light.

Every positive statement you make turns on one of these lights.

Every negative statement you make turns one of them off.

The Truth student knows these positive statements as affirmations and denials. He affirms the good and denies the evil. And in this method there is almost fantastic achievement. Let a man be ever so ill or hopeless or discouraged or frustrated or unsuccessful or unhappy and let him place a curb upon his words, so that every statement he utters or thinks is positive — and then slowly, steadily, inevitably, the black shadow disappears, grows smaller, smaller, and then vanishes utterly. There can be no blackness where the sun shines unimpeded.

Has he merely hypnotized himself into believing what is not so? Is he ill, but believes himself well? Are his circumstances unaltered, but he merely tells himself they are altered? If this were so, it would be a mockery. But it is not so. The human mind, wherein dwells the unlimited power of God, has the power to effect all changes, material and spiritual. It commands the body and the body obeys; it commands circumstances and the circumstances are altered. It is not the mind that does this; it is not the man who does this. It is the power of God that dwells within the mind and the heart that does it. Said Jesus, "I can of myself do nothing"; "the Father abiding in me doeth his works."

This subject is as vast and as mysterious as the universe. But we can understand one thing that we must understand, and that is this: Your power to have the quality of faith that moves mountains; your power to believe in God and to secure prompt answers to your prayers, the granting of all good desires — these are all concerned with your use of words, words thought and words uttered aloud. If these words are positive, and only positive, the positive response in your heart will light up as a man's voice echoes between mountains, automatically.

The rules for changing your life are simple: Speak only words that express positive thoughts. Say no word that expresses a negative thought of any kind.

What is a negative thought? It is any thought that acknowledges or suggests lack of any kind, or anger, fear, envy, jealousy, or any other idea that is not compatible with goodness, "God-ness."

What is a positive thought? It is any thought that acknowledges fulfillment, prosperity, success, health, love, or any other idea that is wholly compatible with goodness.

Each word you speak will have its effect, according to its positive or negative nature. This is inescapable. Positive words will bring about positive circumstances for you in the material world and in the spiritual world.

You will not find it easy at first. How habitually do we deny God by denying the good! Deny evil and the shadow of evil! Affirm the good! By this method is the word "made flesh." "Thou shalt also decree a thing, and it shall be established unto thee."

Let your words always, always declare and decree the good condition that you desire, as though it were already an accomplished fact; let your words deny the absence of any lack, and let them deny the shadow of evil, even though that evil seems to be a present reality. "Judge not according to the appearance."

When out of lifelong habit you find yourself inadvertently making negative statements, recall them and deny them; use powerful positive statements to replace them!

Once you have established the new habit of speaking only positive words and thinking only positive thoughts, your faith in God will have become absolute and His response to your prayers will be swift and perfect.

The words that can and will change your life are the ordinary, daily words of your life, the words that will bring you consciously into God's presence, into His abundant, limitless blessings.

Such is the power of words, the magic of words.

Download a PDF copy of WORDS THAT CAN CHANGE YOUR LIFE