Most people assume that Donald Trump is not a religious man. But numerous articles have identified in Trump a consistent religious belief system. One particular article — Trickle-Down Metaphysics and the Dawn of a Trummpian New Age — draws unfair connections between Trump's beliefs and what we know as New Thought.

The alleged connections with New Thought revolve around power and morality. That one may "decree a thing and have to come to pass" is a godless tenant of power. That the ultimate judge of morality is "every man's conception of himself" is a godless tenant of morality. When taken together, the author concludes, such beliefs are a "pocket guide for fascists" who view success as a "triumph of the will." He places these beliefs at the feet of Donald Trump and declares it to be "Trickle-Down Metaphysics."

I don't know if that is an accurate portrayal of Donald Trump's belief system. But I do know that it isn't metaphysics. Not the metaphysics of Plato, of Jesus, of Paul, of Charles Fillmore or of Martin Luther King. 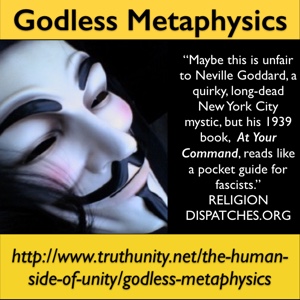 Christian Metaphysics is not about "might makes right"; rather it is about establishing a moral order in one's life and in society that is aligned with a Christ-like moral order.

The Metaphysics of Paul and Overthrowing the Emperor

Christian Metaphysics begins with Paul, who's most-common phrase is "Jesus is Lord." Paul's true mission is not converting Jews or Gentiles, but rather overthrowing the Roman Emperor, for Rome symbolized a brutal world order that could not stand in light of the new world order (of oneness) established by Christ. According to Marcus Borg, when Paul declares that "Jesus is Lord" he is implicitly declaring that "Caesar is not Lord," neither are the masters of slaves, and that there is no distinction between Jew and Gentile. But all of these, including Caesar, are part of the one reign of Jesus Christ.

The metaphysical equivalent of challenging Rome is challenging the reign of the will and the intellect (or understanding) in consciousness. The MBD says "the entrance of Paul and his companions into Europe is symbolical of opening up the word of Truth in parts of consciousness where it has never before been realized (:506)." These new areas of opening are the will and the understanding, two of the Twelve Powers, which are often experienced in the front forehead.

Paul's original name, Saul, comes from the central idea that we use our will to attain that which we need. As Roman civilization used will to impose it's rule over conquered people, so do we, in consciousness, attempt to use our personal will to impose ourselves over things in the physical world.

But Saul was transformed to become Paul. A central message of Paul is that the will, when it is "acting in harmony with divine law, is gentle" (MBD :506). This is why the metaphysical Paul is restrained, constrained; lessened; made small; little.

The Metaphysics of Charles Fillmore and Overcoming the Will

Time and again Charles Fillmore declared that the will is not to be used to serve one's self-interests but rather to serve God. The will is to be surrendered to the I AM, the Christ within. He wrote in Christian Healing 33,

10. Spiritual man is I AM; manifest man is I will. I AM is the Jehovah God of Scripture, and I will is the Adam. It is the I AM man that forms and breathes into the I will man the "breath of life." When we are in the realm of the ideal, we are I AM; when we are expressing ideals in thought or in act, we are I will. When the I will gets so absorbed in its realm of expression that it loses sight of the ideal and centers all its attention in the manifest, it is Adam listening to the serpent and hiding from Jehovah God. This breaks the connection between Spirit and manifestation, and man loses that spiritual consciousness which is his under divine law.

Both Charles Fillmore and Eric Butterworth were critical of what we know as mental science that is not tethered to the taming of the will and its service to the I AM. Butterworth criticized mental science for not leading to one coming to know one's true self. He says "that to program the mind in a certain way to enable you to do certain things to remember things or to follow certain characteristics and so forth, is actually to make of yourself inadvertently the kind of automaton, self-automated."

In a similar criticism of mental science, Charles Fillmore says that mental science has lost its sense of God as a living reality. He says in Keep a True Lent 87 that man, having lost the conscious of the indwelling father as an ever-present reality, no longer impresses the subconscious mind with the supermind, but instead allows it to be guided by one's own conscious mind.

Perhaps the closest thing we have in our lifetime to Paul overcoming the Roman Empire is the overcoming of institutional racism in the United States. The work is not finished, but we at least can honor the ideals and the good work that has got us on our way. Tomorrow we honor the life and work of Martin Luther King.

Like anybody, I would have liked to have lived a long life; longevity has its place. But I'm not concerned about that now. I just wanted to do God's will. And He allowed me to go up to the mountain. And I looked over. And I saw the Promised Land ... I want you to know that we, as a people, will get to the Promised Land. Don't worry about anything. Don't worry about any man. Mine eyes have seen the glory of the coming of the Lord ...

Know that the Emperor is not Lord. Christ is Lord.

I do not know what will happen next. But I do know the teaching we have been given by St. Paul, by the Fillmores and by Martin Luther King:

Know that God is speaking to us today. Know that when we seek only to do God's will then God will allow us to look over and see the Promised Land. Don't worry about anything. Don't worry about any man. Hold the faith and hew out of the mountain of dispair a stone of hope. We will transform the jangling discords of our nation into a beautiful symphony of brotherhood.

Follow-up posting: this post received a fair amount of heated criticism for being either "too political" or "not critical enough." Here is my reply.

My post of Sunday, January 15 2017 entitled Godless Metaphysics got a fair amount of heated response from readers, both from those who support and those to do not support Donald Trump. Here is an example:

Texas is a Republican state and many people voted for Trump. I read the first section of your article twice and I am not sure if you are putting down Trump or not so I gave up trying. But why even put that out there? There is a division between church and state for a reason. I am a student of yours to learn about the church (spirituality) side, not politics...

You have your opinion and I have mine, the difference is people look up to you for spiritual advice, which you are excellent. After the first paragraph you seemed to maybe have a nice article and something about MLK, which appears appropriate for the time, but I did not read any of it because you lost me in the first paragraph. Is that what you wanted? Wonder how many others did the same?

Here is my reply:

Many people in our nation will get their first introduction to New Thought by the many commentators who write about the new President. The article I referenced is a good example of that. My point is that what is being called "New Thought" is not the teachings of the Fillmores, nor of Ernest Holmes nor any of the other foundational teachers in the New Thought movement.

I don't see how I can address this distortion of our theology without highlighting an article such as the one I brought up. The best I can do is to write what I did: "I don't know if that is an accurate portrayal of Donald Trump's belief system. But I do know that it isn't metaphysics."

I felt that I had an obligation to correct inaccurate characterizations of Unity's teachings as being "a pocket guide for fascists." So when you ask "But why even put that out there? " know that I did so because we in Unity and New Thought are getting pounded by misinformed comments, such as what is in this article.