Russell Kemp was a Unity minister ordained 1949. You can read more about his life and spiritual journey in the Ministerial survey further down on this page.

In March 1938, Unity published his article The Triumphant Formula. He addresses the importance of "willingness." He says, "Willingness is sufficient intelligence to glimpse something of the truth that all that is needed is forever pressing to be. Willingness is sufficient intelligence to seek alignment with this good which is forever pressing to become visible, and to assist in bringing it into view." Here is a link to Unity March 1938.

In 1969 he wrote Life Youthfully Now, a book recommended by Joyce Kramer in her audio series, The Circle of Life. Let me add my recommendation of this book. I found it to be both easy-to-read and unique in its approach to what metaphysical religion is all about. For sure, the book is dated but the ideas are really timeless. And the approach he takes does not require anyone to embrace Unity teachings. Experienced readers may perceive some influence of Christian Science and they may also gain some insight into Charles Fillmore's quest for regeneration. But all in all the book is meant for a mass market of all who wish to live more youthfully.

Russell wrote an inspiring affirmation in the summer of 1966. At that time there was quite a bit of acrimony between ministers because Unity School of Christianity had decided to shut down its Field Ministry department, making way for the future Association of Unity Churches, now known as Unity Worldwide Ministries. Here is a PDF of the June 1966 Unity Minister's Association Newsletter. There you will find Russell's affirmation:

Russell Kemp, Monterey, California - This is my prayer for the UMA. "The Spirit of Jesus Christ is the guiding light of the Unity Ministers' Association. All needed reorganization is brought to pass in a spirit of orderly, inspired wisdom, moderation, love and consideration for the rights of all concerned. Peace is inspired by the Christ presence in our members, and all is well."

Here are some files we have on Russell Kemp: 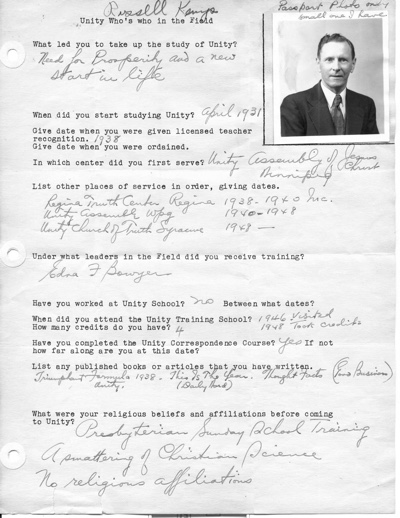 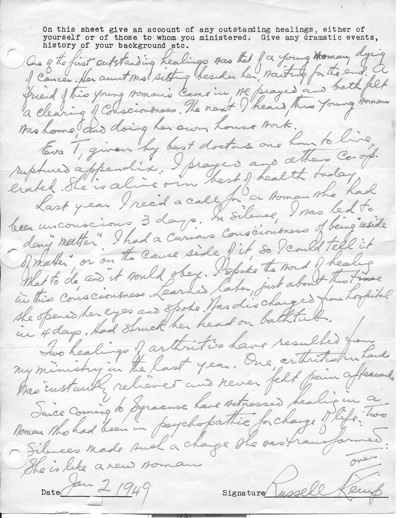 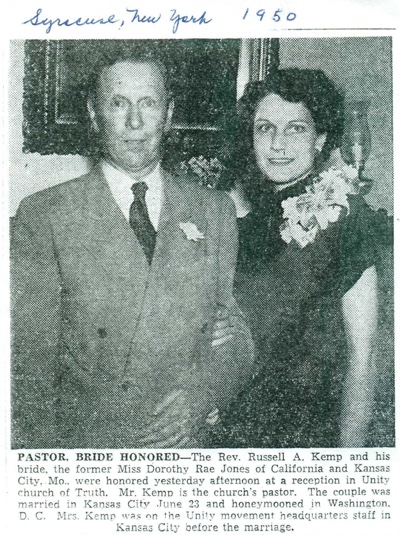 PASTOR, BRIDE HONORED — The Rev. Russell A. Kemp and his bride, the former Miss Dorothy Rae Jones of California and Kansas City, Mo., were honored yesterday afternoon at a reception in Unity Church of Truth. Mr. Kemp is the church's pastor. The couple was married in Kansas City June 23 and honeymooned in Washington, D.C. Mrs. Kemp was on the Unity movement headquarters staff in Kansas City before the marriage. (Syracuse, New York, 1950)