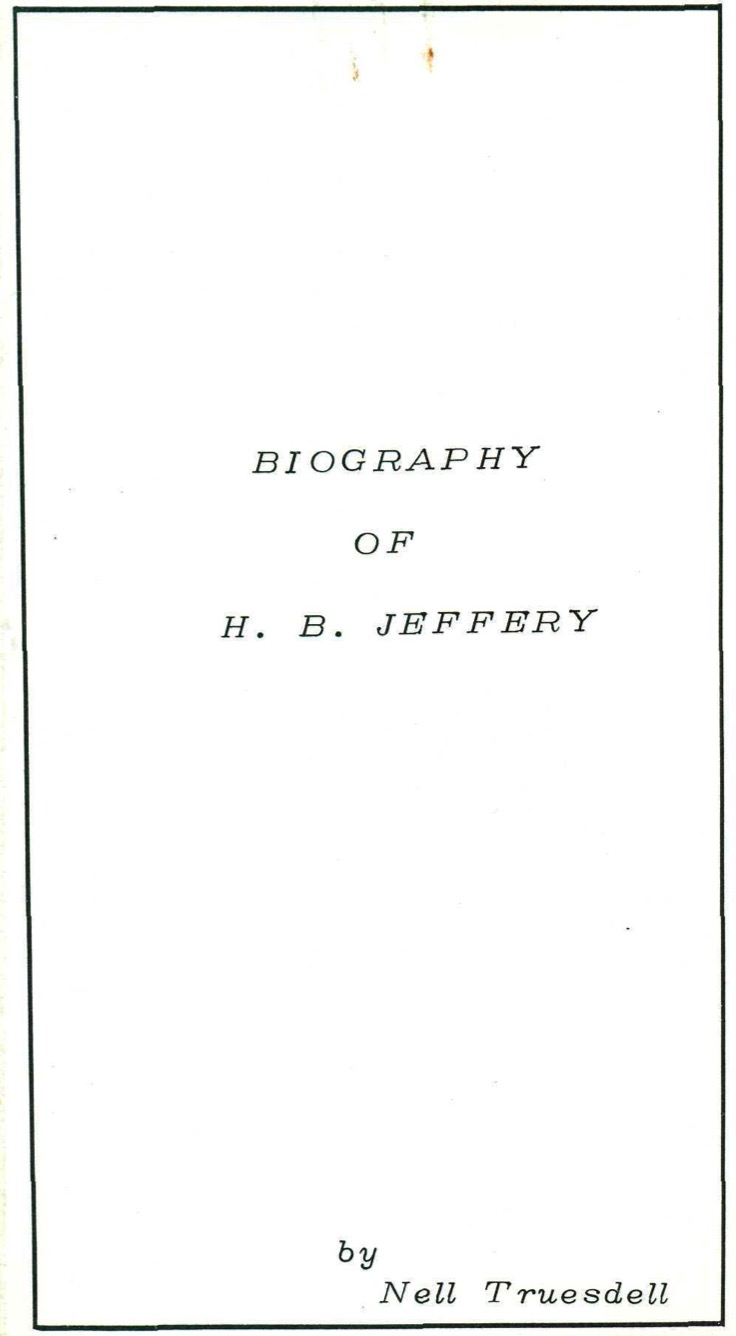 Download a PDF of Biography of H.B. Jeffery by Nell Truesdell

Harley Bradley Jeffery was born January 26, 1872, in Syracuse, New York, to George Adams Jeffery and Ellen Clapp Jeffery. His father worked in the printing trade, starting as compositor for the Syracuse Herald; his mother was a member of the Missionary Society of the Christian Church. Harley was followed by two brothers: Haswell Clark Jeffery, born in 1873, and James Clapp Jeffery, in 1876. The three boys were baptized into the Christian Church, which they attended regularly.

H.B. Jeffery graduated from high school in Syracuse and then went to work with a leading architectural office in the city. Later he went into partnership with an architect and still later went into the construction business for himself. He specialized in building private homes and housing projects.

About 1903 Mr. Jeffery met Dr. Charles Brodie Patterson, a member of the Royal Society of Arts, Letters, and Sciences of Great Britain, who was doing healing work in New York City and giving a series of lectures on what then was the new subject of "metaphysics." Dr. Patterson was so impressed by Mr. Jeffery that he asked him to join him in the work. As Dr. Patterson's lectures became more time-consuming, the ministry fell more and more to Mr. Jeffery; and when Dr. Patterson returned to England, Mr. Jeffery took over his healing ministry in New York and opened a second office in Philadelphia.

Mr. Jeffery did specialized work in philosophy at Harvard University and Columbia; he also studied metaphysics with Dr. James Porter Mills of London.

About 1905 he met Mrs. Emma Curtis Hopkins, the "teacher of teachers." He worked with her in producing her classic "High Mysticism"; and about 1910 and 1911 he gave a series of lectures in England and Europe on "High Mysticism." In England Mr. Jeffery became acquainted with Sir Arthur Balfour, the Prime Minister, and with Judge Troward; for a time he helped Judge Troward in his spiritual work.

When Mr. Jeffery returned to the United States, he resumed his healing practice, and he was more and more in demand as a lecturer throughout the country. He died January 19, 1954, in Santa Monica, California, where he was giving a series of talks. For fifty years he had engaged in healing, counseling, and speaking. At the demand of students, he had written eight books, the copyrights of which are held by the Christ Truth League of Fort Worth, Texas.

This biography is the property of: