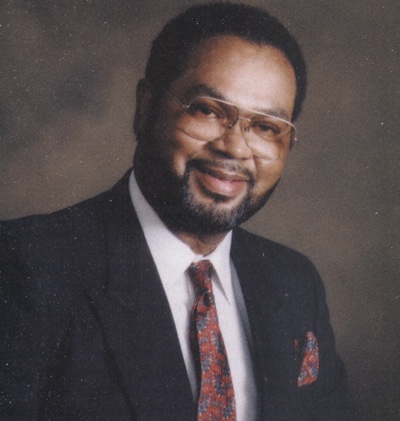 Maurice Williams is an African-American Unity minister who was ordained in 1983.

I invite anyone who is related to Rev. Maurice Williams or who has any information about him to post a comment to this page or to contact me at mark@truthunity.net.

Unity With a Gospel Touch 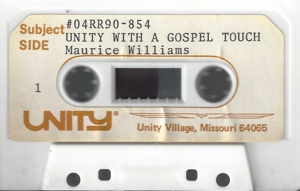 Do You Believe This? 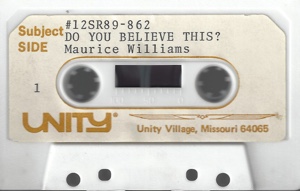 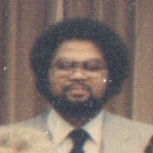 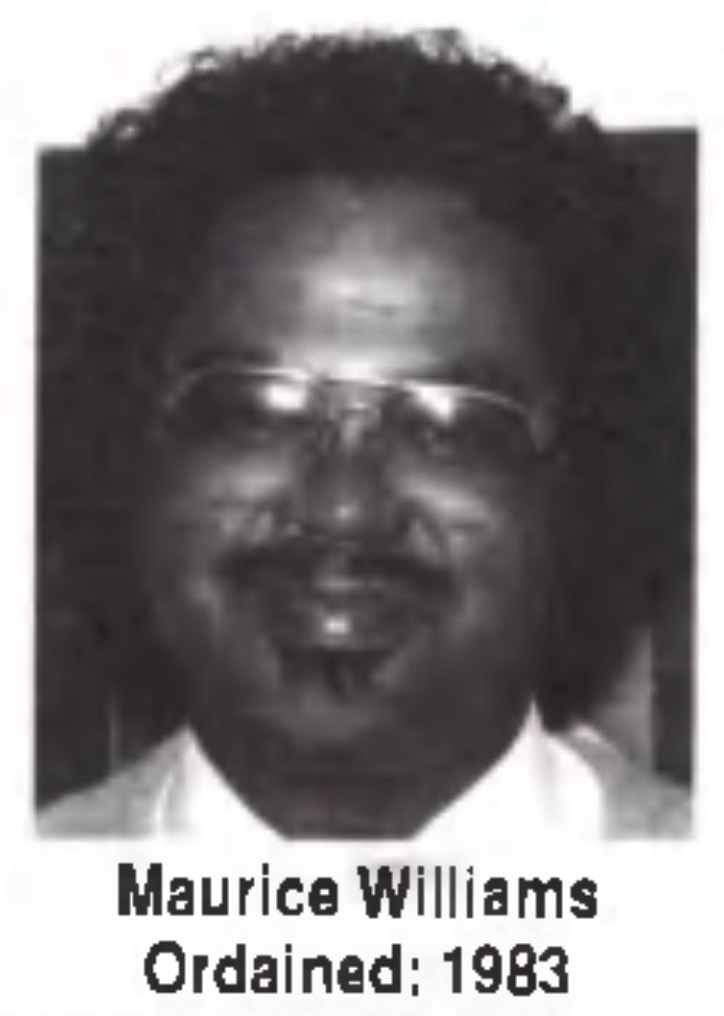 Maurice Williams, former minister of Unity Southeast in Kansas City, has joined the staff at Unity School for Religious Studies (USRS) as an instructor.

Raised in the Chicago, Illinois, area, Maurice originally found Unity in the ’70s after moving to Detroit, Michigan. He enrolled in the first class of the Urban Ministerial School, a branch of Unity’s ministerial program in Detroit, in 1979. After three years part-time in that program, Maurice joined the Ministerial Education Program (MEP) at USRS.

It was in 1981, during the Urban Ministerial program that Maurice was first diagnosed with end-stage kidney failure and given twelve hours to live. He survived to face years of hemodialysis and to become the president of his ministerial class in Detroit.

Although he faced continued major health challenges during MEP, undergoing a kidney transplant in ’83, Maurice was successful in graduating with his class and then going on to serve for four years as minister of the Unity Church of the Bahamas.

With the recurrence in 1987 of his health challenge, Maurice returned to this area. He took some time off to have a second kidney transplant and then served as senior minister with Unity Southeast until he accepted his current position with USRS.

Maurice has been a familiar presence and speaker around Unity School for years. Last year Maurice was a featured speaker at all of the Unity School retreats, several CEP sessions, and the fall Healing Symposium. When not speaking at his own church, he was a visiting speaker and workshop presenter at other Unity churches around the country, from Hawaii to the Bahamas, speaking every Sunday during the last year.

His successful victory over the major health challenges in his life has become the foundation of his current workshop, “5 Steps to Systematic Healing,” a workshop dealing with the importance of forgiveness in the healing process.

“To share with others the importance of forgiveness—how it opens our closed eyes, gets us out of the loop we’re in, and allows us to see the wonder of what God is offering us—is such a wonderful experience. I just love it,” said Maurice. “It also seems perfect that I am now here at USRS at this time.”

A resident of the Kansas City area, Maurice has three grown daughters and four grandchildren. 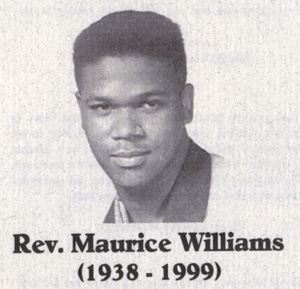 The life journey of Maurice Williams began on September 29, 1938, when he was born in Chicago, Illinois to Ruth and Rowvoyzette Williams. He was the second of five children. His life was greatly influenced by the loving support of his grandmother, Mother Rice, an Evangelist who led Maurice to Christ early in his life, and his great aunt, Mary Julius, whom he adored.

Maurice attended public schools in Chicago and Robbins, Illinois. Upon graduation from high school at age 17, he entered the U.S. Air Force where he served as a specialist in jet airplane mechanics and received an honorable discharge in 1960.

He worked for the Chicago Transit Authority as a bus driver and served as a Union Representative while in this job. He was also a carpenter for eight years. Maurice and Doris E. Stephens were married in November 1965; three daughters were bom of this marriage. He later married Doris Rouse.

Maurice received an Associate Degree from Wayne Community College while attending the Urban Ministerial School in Detroit and completed both in 1982. He was ordained as a Unity Minister in 1983 and became the minister of a church in Nassau, Bahamas. He later took on the leadership of Unity Southeast Church in Kansas City, Missouri until 1993, when he became a full-time instructor at Unity School for Religious Studies and taught in the Ministerial Education and Continuing Education Programs.

Rev. Williams traveled extensively throughout the U.S. and abroad, speaking and presenting healing workshops. He served as a part-time Chaplain for Research Medical Center and Baptist Hospital. He is loved and respected by friends, ministers, teachers, colleagues, students and congregations everywhere.

He is survived by: 3 daughters, Stacy Laverne and Pamela Maurice of Tulsa, and Wendy Ruth of Kansas City; 5 grandchildren, Terrance, Felicia, Brandy, Samantha and Jasmine; 2 brothers, Vincent and Eric, of Illinois; 1 sister, Denise, of Atlanta; son-in-law, Leroy McClellan, of Tulsa; a host of nieces and nephews; and his special friend, Myra McNaughton.

In lieu of flowers, love offerings to the family may be directed to Rev. Jim Lee, Chaplain, USRS, made payable to Doris E. Williams

Rev. Maurice Williams will be deeply missed by all.

I met my younger brother Eric at the airport on a hot July day in 1987. I love my brother and I am always glad to see him, but this time the quality of my life, my very life itself, depended on him—if only he could pass the test.

My heart sank as I watched him come off the plane. He was overweight, bulging out of his three-piece suit so much that he had popped two buttons.

My life had changed drastically since April 1981. Back then I was attending evening classes at both a ministerial school and a local community college and working ten to twelve hours a day as a carpenter; I was understandably tired.

But when an overwhelming lack of energy persisted, I decided to have a thorough physical examination. Afterward, I was stunned by what my doctor told me: “Maurice, you have irreversible kidney failure.” That evening, I was sent to a hospital in Detroit which specialized in renal problems, and doctors there concurred that I needed to go on dialysis immediately.

So I began my treatment—four hours of dialysis, three times a week—while continuing ministerial and community college classes. I received my college degree, but needed to finish my ministerial training at Unity Village, Missouri. I told one of my teachers, “I’m going to stay here in Detroit until I’m healed.”

Six months later at Unity, I received a telephone call at 2:30 a.m. A doctor asked if I wanted a new kidney. “Of course I want a kidney!” I replied. I was admitted into the hospital later that morning, fully confident that the transplant was going to work. The Silent Unity prayer ministry and my classmates in ministerial school were all praying for me.

The surgery went well, but it took three weeks for the new kidney to work sufficiently for me to go off dialysis.

In June I graduated from ministerial school and was ordained. In October, I was accepted as the minister of a Unity church in Nassau, Bahamas. I was so happy when I arrived; the whole congregation greeted me at the airport—all thirteen of them.

While I was there, the church grew to over a hundred members. And then, for some reason, my body began to reject the new kidney. Sadly, I left the church in Nassau and returned to Kansas City for more dialysis.

My sister offered to be a kidney donor, but because of a problem detected during an examination, she did not qualify. Then my mother called and encouraged me to ask my brother Eric to be a donor.

“Mom, how healthy can his kidneys be? You know that Eric is a good-time man, and he’s overweight too! I don’t think he could possibly pass the physical to be a donor.”

But my mother persisted, so I finally gave in and called Eric, who lived in Detroit. I asked him if he would be my donor. Without even a second thought he said: “I was just waiting for you to ask. I’ll be glad to give you a kidney.”

But as Eric sort of rolled off the plane that day, my faith was at a low ebb. He looked at me and said, “I came here to give you a kidney, and I’m not leaving until I do.”

After Eric was checked out, the doctor said, “Great! He’s a perfect match; the best donor you could ever hope for.”

I blurted out, “Are you sure you’re talking about my brother, Eric Williams?”

That taught me a lesson: When God is ready to bring your good to you, God will do it in spite of your own faith or lack of it. What I have learned and am still learning from Eric is something that I could never learn in any school: unconditional love.

Eric was wheeled into the operating room just ahead of me. With my mother, father, and some friends standing nearby, he said something that touched my heart: “Maurice, I’m giving you this kidney because I love you.”

Then he said something that touched my soul: “And Maurice, God is giving you this kidney because God loves you.”

So all these years since then, Eric has been with me. I am pleased that my health has been really good. It is a gift. My perception of Eric for a time was limiting, but Eric gave me a part of himself and the gift of unconditional love. That is something we all have to live in order to give. And the gift of unconditional love blesses us first before it reaches out to bless others.

Eric helped me know this truth: With God, all things are possible. I have embraced this truth and share it in my ministry with anyone who is willing to listen. And I encourage everyone to never, never criticize any child of God, for each one is a potential channel for good, a giver of unconditional love.

Maurice Williams is an ordained Unity minister. He is presently serving as an instructor at Unity School for Religious Studies, Unity Village, Missouri.