in 1976 she was serving five Unity churches in Texas—Abilene, Harlingen, McAllen, San Angelo and Tyler—while also serving as an assistant to Donald Curtis at Unity of Dallas. She “rode circuit” in a Merry Miler, purchased with her own funds, and she gave workshops and seminars all over the US and Great Britain, bringing the Unity message to areas where there was no Unity church.

Have you ever wanted to be a Unity minister? Marge Kass just may be the perfect role model. Marge will be 92 years old this June (2013). She’s retired but active and living in Baton Rouge, where she founded the first Unity church there.

Her Joy Dynamics seminar opens with a bold and blunt Edwene Gaines style statement: “My name is Marge Kass and I believe that the Kingdom is already here.” If you like Edwene’s style and message, then you will fall in love with Marge Kass. She once told a reporter that the “Joy Seminars” stress looking at one”s self and learning to know one”s self; understanding what makes us do the things we do. She teaches us to embrace fear and to “allow joy to go out and play.”

I want you to do three things:

Also, if you know Marge, add a comment at the bottom of this page. If you know anyone knows Marge, forward this page on to them. 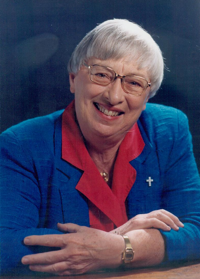 Marge became a Unity minister in 1963. She served with Rev. Dr. Curtis in Dallas for two years, then felt the calling to go on the road and minister to small groups/churches. She became a circuit rider going around the US, Canada and England giving workshops and seminars. Marge did this for six years then had to reduce the travel due to an arthritic hip. She came to Baton Rouge for a workshop and met a doctor who helped with her hip. She left to give another workshop and while traveling, the doctor called and asked if she would become the Unity minister in Baton Rouge. She called the church The Church of the Open Road and became the first Unity minister in Baton Rouge in 1969. She continued to do some traveling in the Southeast. Marge finally retired from the Unity Church of Christianity in Baton Rouge in 1997. Rev. Marge Kass will be 92 years young in June 2013. She resides at the Ollie Steele Burden Retirement Center in Baton Rouge where she remains active and occasionally visits the church for Sunday service. Rev. Marge is still loved by the congregation and many ministers/speakers who come to the church and ask about her.

Marjorie Conner Kass was founder of Unity Church of Christianity in Baton Rouge and was a maverick minister of the Church of the Open Road. She passed on May 23 at Ollie Steele Burden Manor Nursing Home. She was 91 years old.

She served at Unity Church in Baton Rouge, where she served as pastor from 1978 until 1997; and at numerous other churches that she helped establish. Born in Syracuse, New York to Florence and Charles Conner, Marge was a music education graduate of Syracuse University, and was later ordained by the Unity School of Christianity. She worked as a public school teacher and Minister of Music in the Florida Methodist Conference, and organist for in Ft. Lauderdale for over 25 years.

Ordained by Unity in 1971, she then served at the Unity Church in Dallas, TX for two years before establishing the Church of the Open Road. She developed the “Joy Dynamics” seminar, and took her message to 39 states, Canada, and England.

Marge Kass said that The Kingdom of Heaven is within us, remarking that these were the words spoken by Jesus. She continued, “Complete health, energy and vitality: the Place of Peace are within us.”

Marge Kass is a modern circuit rider, and she travels to cities and small communities, and she is moved by the spirit. She continues, “It truly is a spirit thing: something inside is pushing. This is not what I would have chosen to do 10 years ago, but it is what I do and enjoy doing now.” Rev. Kass spoke and presented a “Joy Dynamics Seminar” during the past week at First Unity Temple. “The seminars are the means of raising money to take Unity teachings to people who would not otherwise be able to have them,” she explained.

I was the associate minister in the Dallas Unity Church. The minister there drew people from miles around, and they said “I wish there were something like that where I live.” So, I began to move out from Dallas, and the Church of the Open Road gradually evolved. It is a real church; incorporated, and I hold services in homes, church buildings or rented rooms.

The Joy Seminars, she said, stress looking at one’s self and learning to know one’s self; understanding what makes us do the things we do. “Underneath is the Kingdom of Heaven,” she said. “We have been conditioned by the things which have happened to us.

She said, “I teach that when you find something in yourself that you don’t like you can let it go.” “Letting it go”, in Rev. Kass’s terms is a positive thing, but instead a simple putting aside, as in her example of the “concern can.” “I tell people to put a “concern can” on the kitchen shelf. Then to put all their concerns into it and forget them. Then, take them out once a week and look at them, but don”t give them any more than that.” One may have a responsible concern, when it is a appropriate, she believes, but it is not necessary to devote one”s entire energy to it, even it it involves tragedy.

INDEED PEOPLE HAVE endured tragic experiences and have gone on to make their lives satisfying, worthwhile and even happy. If we can learn from these experiences and call all things good, even the discomfort, then we can learn further, and can chose what our lives will be. We don”t have to react to disaster in a way, which permits it to control us. We can, but we don't need to.” Her purpose in this traveling ministry, going from place to place in her converted van, the Merrry Miler, is to find people have questions, and no one to answer them, and to try to give them answers. “I drove into a gas station one day, and the attendant saw the clergy emblem a friend had put on my license plate. He said, “I have been doing a lot of thinking lately, and I have come up with the idea that if we think right we don”t need to die. Am I crazy?” “I said of course that he wasn't crazy at all. Millions of people share the same idea. All churches teach this. Life is continuous forever.”

John Wesley taught “think and let think.” This means each person should follow his own inner guide, and let others do the same. I had spent a lot of time studying religious science, theosophy, all the things we loosely define as “new thought.” Then I had an inner experience, which led me to Unity, influenced by my experiences while organist at Temple Emanu-el Reform Jewish congregation at Ft. Lauderdale. “GOD IS ONE” is one of the Jewish teachings. One God. Unity. I began to study.

She enrolled in the School of Ministerial and Religious Studies, Unity Village, Mo., and was ordained a Unity minister in 1973 [Front row, 3rd from left].

People today are hung up on fears, particularly the fear they must always please others. Another hangup is “always knowing what others should do.” We can't. We are lucky if we know that we should do. We become angry if our rights are stepped on. Many people are seeking the wrong things, asking the wrong question. When I lead a seminar, I don't feel as if I am teaching; only showing others where I have been. We learn to know ourselves. Why do we get angry? Is it because someone is putting us down? It takes self-observations and loving ourselves and making ourselves O.K. Learning the light touch and watching ourselves enjoy life. People are looking for comfort and freedom from fear. These are both illusions.

THE THINGS WHICH give us discomfort are the things which teach us, and fear opens us to learning if we will listen. People ask questions about life after death, about reincarnation, and I have to tell them I don't know, and it doesn't matter. The important thing is learning to live a better life today; this is the question I would address. It is the power within which directs us, putting the responsibility directly on the individual. No one will do it for us, or can do it for us. We sometimes say, “We will pray with you, but not for you.” 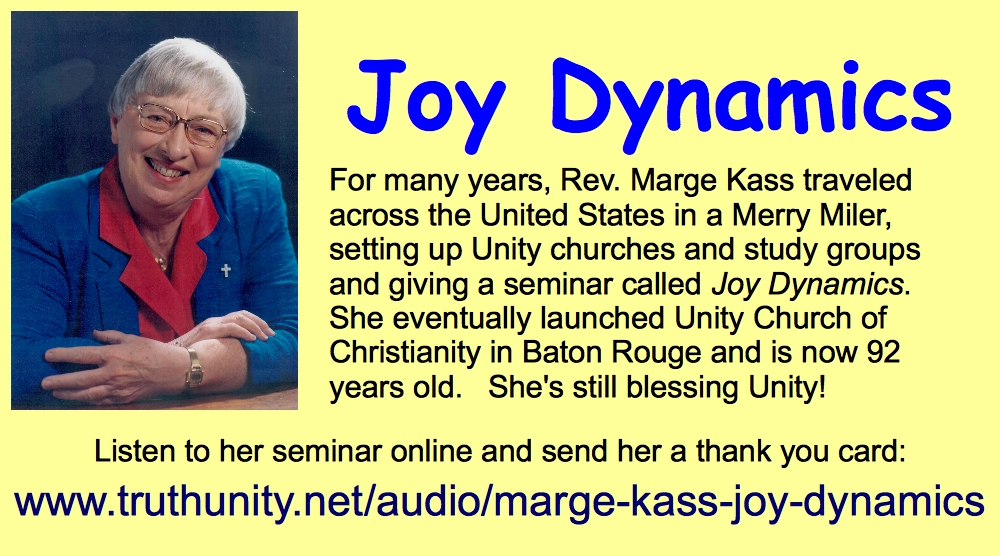 Then, listen to Marge

The Church of the Open Road 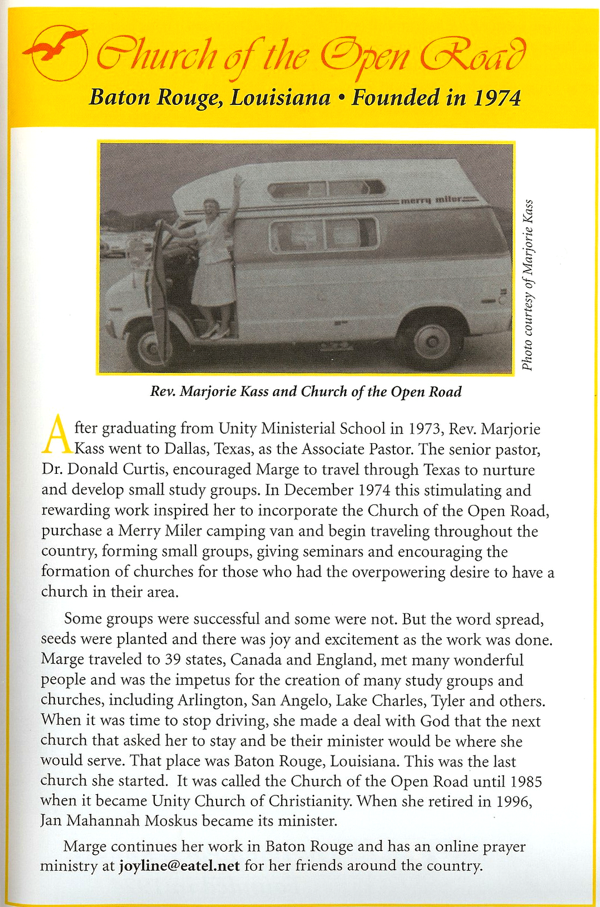 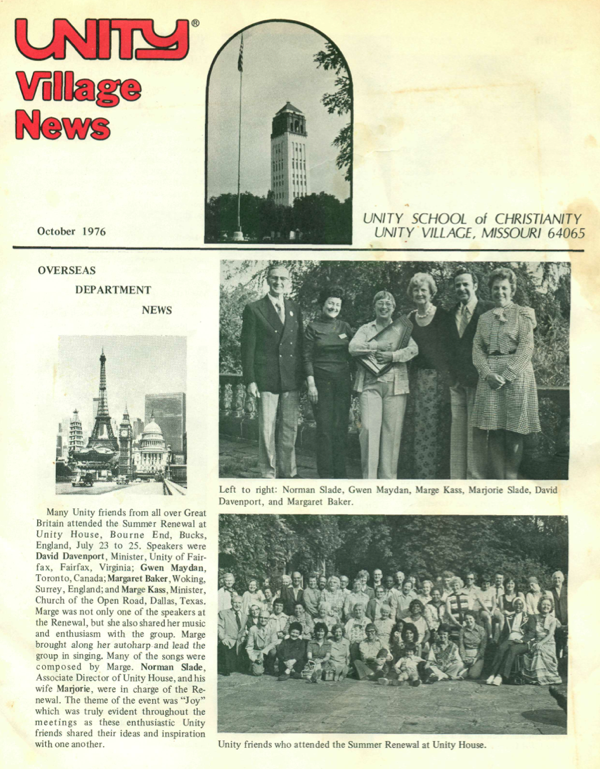 Thank you note received from Rev Marge in April 2013 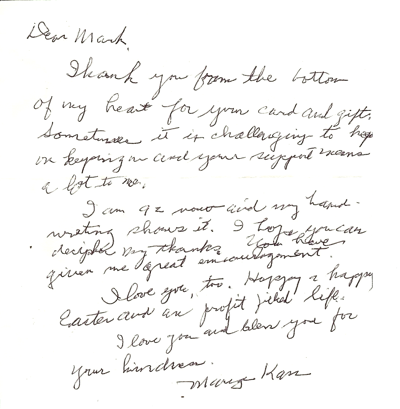 If you have been blessed by Marge and her Joy Dynamics Seminar, then why not make an offering to Unity Church of Christianity in Baton Rouge, the church she founded and the church that continues to be her loving community?