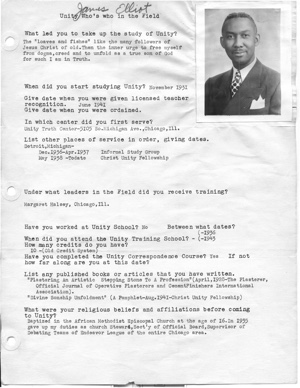 Here is the 1948 Field Department Survey for Dr. James L. Elliot DDS, who became a Licensed Unity Teacher in 1941. He began his study of Unity in November 1931 and first served Unity at the the Unity Truth Center 5105 So. Michigan Ave., Chicago, Illinois. He served in Detroit, Michigan leading an informal study group from December 1936 to April 1937 and was serving Christ Unity Fellowship from May 1938 to 1948, when he submitted this survey.

Dr. Elliot received training from Margaret Halsey in Chicago. He attended the Unity Training School in 1936 and 1943, earning 10 credits. He also completed the Unity Correspondence Course.

I was born April 22, 1896 in Macon Georgia of lowly parentage, my father a journeyman plasterer. At the age of eleven the family moved to Atlanta Georgia. Here I finished my apprenticeship as a plasterer under my father, William Jordan Elliott. 1917 attended U.S. Army training school, Fort Des Moines Iowa; commissioned Second Lieutenant of Infantry. Honorably discharged from the Army after serving nine months in France as a teacher of bayonet combat and self-defense. In 1921 graduated from Atlanta University with A.B. degree [and] well known as a good athlete, member of the glee club, trombonist in school orchestra. Graduated from the University of Michigan College of Dentistry, 1925 with degree Doctor of Dental Surgery; was excused from taking two final examinations in my senior year due to consistent good work during the 1924-25 academic school year.

"Honor and shame from no condition rise;
act well your part, there all the honor lies." (Pope)

He had two published items:

He wrote that prior to coming to Unity he was:

Baptized in the African Methodist Episcopal Church at the age of 16. In 1935 gave up my duties as church Steward, Secretary of Official Board, Supervisor of Debating Teams of Endeaver League of the entire Chicago area.

He lists the following outstanding healings: