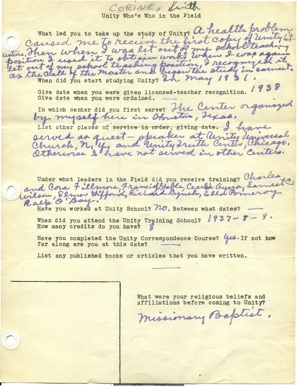 Here is the 1948 Field Department Survey for Corine Smith, who began her study of Unity in 1931, became a Licensed Unity Teacher in 1938 and was ordained a Unity minister in 1952. That same year she pioneered a Unity center in Houston, Texas.1

Her center in Houston was the Loving Heart Unity Center, 3902 Leffingwell, in Houston and it is listed in the 1956 and 1966 Unity Minister's Association Yearbooks.

Corine Smith initially took up her study of Unity to overcome a health problem. Later, when she was let out of two teaching positions, she recognized that she was being called to ministry and began to study in earnest.

Her story includes many accounts of both healing and increases in prosperity, and they include overcoming cancer, chronic colds, female trouble and head-aches. Her prosperity consciousness helped in the founding of a Unity center in Houston.