Cora Dedrick came to Unity School of Christianity to work as secretary to Charles Fillmore sometime between 1900 and 1905. On September 8, 1918 she was ordained a Unity Minister by Charles Fillmore. For a short time she served as Director of Silent Unity and then became private secretary to both Charles and Myrtle Fillmore until Myrtle’s death in October, 1931. In December, 1933 she and Charles Fillmore were married at the home of Lowell Fillmore on Unity Farm. The following day they left to travel extensively throughout the nation to lecture on the teachings of Unity. In 1939 she served on the faculty of Unity School of Christianity.

She was interested in interpretive dancing and often interpreted prayers in dancing at Unity meetings. She compiled two books from the writings of Charles Fillmore, Keep A True Lent and Atom-Smashing Power of Mind. She is the author of Christ Enthroned in Man. Cora was 57 years old at the time of her marriage to Charles Fillmore. They were married 15 years when he made his transition. She lived to the age of 79, passing in 1955.

It was a pleasure to have your letter and I am sorry that I was not at home when you called for I would have enjoyed visiting with you. Thank you for your comments on the healing meeting of June 21. As my talk was for that day only, it was not prepared for publication, but I am glad to know that the message has been of assistance to you. Rest assured my blessings are with you and the beloved assistant who has stepped over into the invisible side of life. Her work in Truth here will be a staff of support in her continued unfoldment.

I am very glad to give you a general outline of my diet and to thank you and Doris at the same time for your very kind comments. Tell Doris my diet consists mostly of fresh, green vegetables such as green beans, peas, spinach, corn, beets, lettuce, tomatoes and so forth.

Usually I have a potato each day (baked, preferably). My cooked vegetables are seasoned with butter and cream, and for frying and baking I use butter, margarine, or olive oil. Also I use vegetable salt for seasoning. Pried foods are used only very occasionally. Of course I do not eat meat, but I do eat fish, of various kinds, and eggs. I like soybean butter and also when I can get it I drink goat’s milk. For bread, I use Rye Krisps and when not available I substitute Triscuits. Plenty of fresh fruits of all kinds have a place in my diet, and when fresh fruits are not to be had I use canned fruits.

I have a drink of carrot and celery juice about every day; sometimes I have beet juice, lettuce juice, or tomato juice. Also I drink alfalfa tea, desert tea, and so forth. I eat no pastry, no salad dressings, or rich foods of any kind. This will give you an idea as to the nature of my diet but it can be varied as you choose.

May you and all with whom you are In contact be ever richly and graciously blessed as you follow and practice Truth in all your ways, In His Name,

From a Blaine Mays tribute published in 2000: 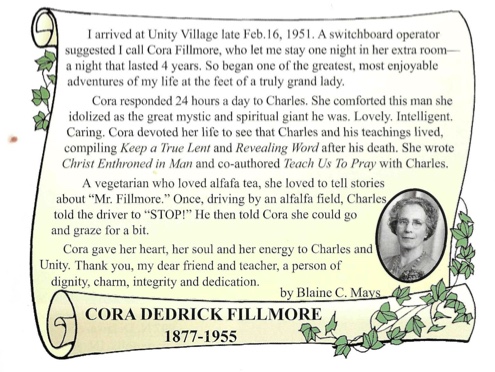 I arrived at Unity Village late Feb. 16. 1951. A switchboard operator suggested I call Cora Fillmore, who let me stay one night in her extra room—a night that lasted I years. So began one of the greatest, most enjoyable adventures of my life at the feet of a truly grand lady.

Cora responded 24 hours a day to Charles. She comforted this man she idolized as the great mystic and spiritual giant he was. Lovely. Intelligent. Caring. Cora devoted her life to see that Charles and his teachings lived, compiling Keep a True Lent and Revealing Word after his death. She wrote Christ Enthroned in Man and co-authored Teach Us To Pray with Charles.

A vegetarian who loved alfafa tea, she loved to tell stories about “Mr Fillmore.” Once, driving by an alfalfa field, Charles told the driver to “STOP!” He then told Cora she could go and graze for a bit.

Cora gave her heart, her soul and her energy to Charles and Unity. Thank you, my dear friend and teacher, a person of dignity, charm, integrity and dedication.