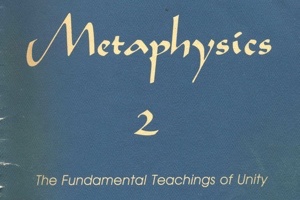 The term "ethers" was used quite often in the writings of Charles Fillmore. It was a term that was popular among the scientists and metaphysicians of his time to explain how activity takes place in the universe. However, it has become apparent that the factual reality of etheric substance has been disproven by modern science. This tends to cause some doubt and confusion as to what Mr. Fillmore actually meant when he used this term in his teachings.

It is important to point out that Mr. Fillmore's understanding of the idea of a dynamic universe transcends the vocabulary he used to describe it. This helps us understand that while physical science is subject to change, universal principle is eternal.

The following section on the history of the ether concept will shed light on the striking parallels between Mr. Fillmore's observations and the discoveries of modern physics. The purpose of this information is to help Truth students gain a clearer understanding of what Mr. Fillmore meant concerning the invisible realm of all thought and energy.

In classical Newtonian physics, often referred to as "old physics," the ether was thought to be a hypothetical substance that filled all space and matter. It was a medium or media that transmitted gravitational, electric and magnetic forces from one material object to another, much like a wave moves across an ocean. Old physics saw space to be a passive, unchangeable part of the universe with no dynamic characteristics. This view is analogous to a movie screen that, while facilitating the projection, plays no active role even when the most violent scenes are projected upon it. In short, a "passive" space, requires a "dynamic" ether so that material objects and invisible forces become interconnected. This view was dominant from the 16th through 19th centuries.

In the late nineteenth century, with the discovery of electric and magnetic force fields, the idea of a passive space was radically changed. Beginning with Albert Einstein's theory of relativity, space was no longer seen as three-dimensional, nor time as a separate entity as asserted in the Newtonian model of the universe. New physics asserts that time and space are connected and form a four-dimensional continuum of "space-time." This means that, while not visible to the human eye, everything in the universe is interconnected so that the simple movement of one's hand causes the entire universe to adjust. Staticity, material particles at rest in a passive space, has given way to dynamicity, a continuum or web of relationship. The result is a holistic or organic view of reality which no longer requires the presence of an invisible dynamic agent (ethers) to facilitate connection.

This shift from atomism to holism is illustrated in the difference between continuous motion and quantum motion. In the following diagrams, notice how the Newtonian model is made up of a series of "static positions" and "momentums" while the quantum model "leaps' from one image to the other without a series of static positions. Also, in the quantum model the consciousness of the observer determines the change that is taking place (the famous Heisenberg uncertainty principle). 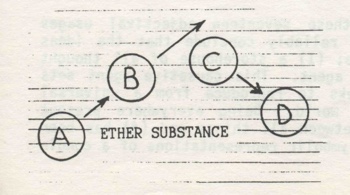 "A," by way of, or because of, the ether substance impacts "B," "B" likewise impacts "C," etc. An "ether substance" is needed to convey the movement which takes shape in sort of a wave action. Also, the observer has no participatory role. 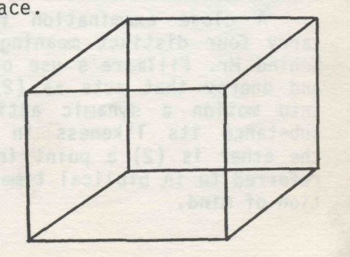 Which side of the box is in front, the lower or the upper? Look again. No "ether" is needed to facilitate the change since there is not a series of positions but rather a leap from one position to the other. Also, it is important to note that it is the observer's consciousness that causes the change to take place.

FROM EMPIRICISM TO MYSTICISM

It is interesting to note that "dynamicity," the basic idea within the ether concept, has proven to be the very nature of the material world. In spite of this truth there is a tendency to abolish the ether concept altogether since it is an integral part of "old physics" and the mechanistic world view therein. While it is true that the concept of an invisible hypothetical substance called "ether" is proven to be in error from a scientific point of view, the interrelated nature of parts that the concept facilitated is not only true, it is the superstructure of the entire universe. Web theory or ether substance, the difference is more philosophical than substantial. Dynamic action is the idea resident in both concepts. As to the shift in concepts by science, the words of the semanticist Alfred Korzybski seem appropriate, "the map is not the territory."

History has shown us time and again that scientific concepts change, universal principles do not. Already scientists are talking of "black holes," "anti-matter," and other new concepts that will soon supplant the present theories. The metaphysician on the other hand, freed from the limitations of "Logicland," begins with the supposition that "spiritual things must be spiritually discerned." Such was the approach of Mr. Fillmore, and with amazing accuracy his IDEAS expressed through his various ether references have been validated by science. These ideas are merely clothed in contemporary scientific jargon. For example, the Heisenberg principle of indeterminancy asserts that the consciousness of the observer influences the object being observed (see the "modern quantum mechanics" illustration). Is not Mr. Fillmore's thesis that "consciousness is causative" the very same realization? Without question, the parallels between Mr. Fillmore's observations and modern physics are striking.

The Ideas Behind Mr. Fillmore's Use of The Term "Ethers"

The Charles Fillmore Concordance lists seventy-seven references to the term ethers. These are found in sixty paragraphs of the ten books pub lished by Fillmore. With some variation, these take shape in seventeen adjectival usages; namely,

A close examination reveals that these seventeen adjectival usages carry four distinct meanings. One could reliably conclude that the ideas behind Mr. Fillmore's use of the term are; (1) a storehouse of all thought and energy that acts as (2) a causative agent. This causative agent sets into motion a dynamic activity that seeks to reproduce from a universal substance its likeness in the material world. Being everywhere present the ether is (2) a point in connection between all things and (4) has been referred to in biblical times in various symbolic representations of a condition of mind.