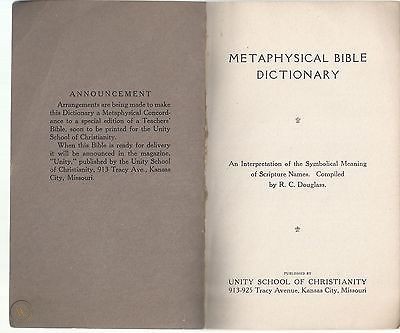 The following is from the Introduction to Metaphysical Bible Dictionary when it was published as a book in August 1914.

In presenting to Bible students a dictionary of biblical names of persons and places, with definitions involving their spiritual and metaphysical signification, we are aware that we are entering a field comparatively untrodden in modern Scripture study, yet a field where lies concealed mines of wealth in spiritual truth.

The only apology necessary to offer for this effort to bring out these interior meanings is, that it is demanded by the universal dissatisfaction with the unthinking literalism of the past, and by a disposition everywhere to “search the Scriptures,” as for hid treasures, which the enlightened soul intuitively knows exist there.

In all ages there have been men of large spirituality and minds mystically touched, who out of an inner consciousness spoke a Wisdom too high to be expressed in ordinary terms of intellect. They therefore wrote in mystical terms, garbing their lofty ideas in imagery and allegory, as a vehicle for conveying spiritual truth to receptive minds, and concealing it from the unworthy. Not that they would withhold it, but that in the nature of the case it cannot be received in the unregenerate mind.

All inspired or mystical Scriptures therefore need to be interpreted, that the prophetic message may be received for the enlightenment and enlargement of those who are receptive to it.

But mysticism is not limited to apocalypses and parables, for in general the Bible is one great allegory of man; wherein all names and numbers are parts of the great alle­ gory, as well as every supposedly unimportant detail, which mystically is of great value.

Names and numbers have a value beyond their literal function; and this signification is not arbitrary nor accidental. All this goes to show the great importance of Bible history, in as much as the historical aspect is not the highest aspect or intent of the Word. In this sense, at least, the people of such history are indeed “God’s peculiar people.” This great mystical allegory of the Bible thus becomes a sort of cabalism, or mystical code, for the teaching of spiritual truth, for the unfoldment of the consciousness, that men may thereby attain to the exalted state of “sons of God.”

When St. Paul said, “Spiritual things are spiritually discerned, he implied that there is a plane of consciousness and of expression above the ordinary human thought and life; a consciousness not comprehensible to unregenerate mind, and a languaged expression which must be spiritually discerned by faculties higher than those of the sense mind— the “mind of the flesh.”

The Hebrew system of religion came out of a great antiquity, being derived from the most ancient Brahminic system. For Abraham, as his name indicates, was himself a high-cast Brahmin. Although he came out of Chaldea, he was not a Chaldean, though speaking that language. The Brahmins were always true to their religion and their blood; and their descendants, the Jews, have always ex­ hibited the same characteristics, even to this day, in whatever country they live.

When Jesus said, “Not one jot or tittle of the law shall fail,” he was referring to this very thing, namely, that every angle, line or tittle of a letter has a peculiar meaning of its own, the tittle” being the point at the top of the yod ( “i” ) , which has an important significance. Such a language must be studied from the viewpoint of the mystic. It follows then, that only those who have developed some degree of the mystical sense are fully competent to correctly interpret or translate. There are real mystics today, just as truly as in remote ages, even among theologians— mystical minds.

One of the most beautiful illustrations of the mystery of numbers and letters, with the interpretations, is found in Genesis 14, in the story of Abram and Lot, which is referred to in this work. When we divest the record of its historic aspects, and find in it our own soul’s experience, then will come to the soul a quickening power, from our recognition of power, which the writer’s mind had endowed it with. For Abram and Lot are both in us, Abram being the true man, spiritual, and Lot the false man, carnal. The carnal man is the prodigal, who “pitches his tent toward Sodom,” and becomes swallowed up in the sense-life; until, discovering his undone, helpless condition, his heart turns in contrition to the spiritual (Abram), who flies instantly to the rescue with his “318 trained servants born in his house,” and saves the penitent prodigal. The key to this mystical allegory lies in the number, “318”. This number is referred to by certain second century writers, as in the Epistle of Barnabas, chapter 8. Also Rivet, in his treatise on “Clement of Alexandria,” sums up the numerical values in Eliezer, Abram’s steward, and finds their number to be “318.” In Genesis 15:2, Abram said: “What will thou give me, seeing I go childless, and the steward of my house is this Eliezer of Damascus?”

Note the numerical values in the name, Eliezer:

Here “Eliezer of Damascus” is regenerated intellect (because “born in Abram’s house”), to which is committed the power to bring the whole mind into subjection to the Christ. That is, the Christ uses our intellectual faculties in the work of regeneration; for intellect, when redeemed, can marshal spiritual forces for the great work of redemption. Here the spiritual sense is illuminating, while impossibilities lie in the path of the literal view. The allegory always brings the lesson home to the heart, while the historical is far away and involved in doubt.

The teacher of Hebrew should be a man skilled in these inner meanings; otherwise recourse may be had to the Cabala, which is the highest source of Bible mysticism. We are using the word mysticism to indicate a spiritually enlightened soul. Such have been the Bible-writers of all ages. While they may not have been men great in intellectual culture, they were spiritually instructed in the higher Wisdom, and spoke that Wisdom out of an illumined consciousness. From these considerations it must be clear why the Bible has such a charm to the religious mind.