Lesson 1—What is Unity? 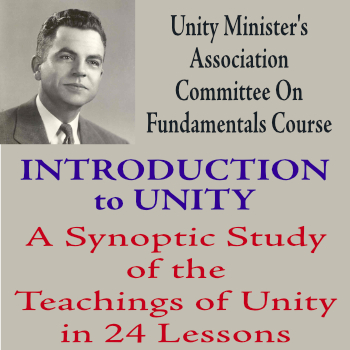 Here is another resource that addresses the question, “What is Unity?” It was written by Eric Butterworth in the 1950s and he wrote this piece “to briefly outline the background, the ideals, and the aims of Unity, and to correctly identify it as a non-denominational religious movement.”

The primary claim of this resource is that Jesus did not establish a (physical) church “on Earth” and that Unity is not interested in forming one either. The true church of Jesus is one built in consciousness. That has been established in many Unity texts, particularly in lesson 4 of the correspondence course, “The Body of Christ” and the many references to “Unity Church Universal.”

What’s interesting is how Butterworth frames the universal church built on faith with discipleship on one side and the expression of the body temple on the other side. He does this with his selection of scripture references. The calling of disciples leads to an awareness of the Christ within, revealed not by flesh or blood but rather by the Father within. And that awareness leads to a formation of the temple of God—the spiritual body.

Many have caught sight of the fact that the true church of Christ is a state of consciousness in man, but few have gone so far in the realization as to know that in the very body of each man and woman is a temple in which the Christ holds religious services at all times: “Ye are a temple of God.” The appellation was not symbolical, but a statement of architectural truth. Under the direction of the Christ, a new body is constructed by the thinking faculty in man.

This is a challenging doctrine. It may make sense to a dedicated disciple, but it isn’t attractive to a newcomer. Which leads to another point of interest.

But in this resource Eric Butterworth offers some really challenging doctrine. He begins his class by emphasizing to these people who are new to the Unity church that the true church of Christ doesn’t truly exist in physical form and that they are called to express a new body temple.

But it didn’t make sense for ministers who were serving in the field ministries. The field ministers weren’t only trying to get people overcoming and regenerating, they were trying to attract attract people away from their own “church affiliations” into a physical, Earthly body of Christ.

Butterworth wrote this piece in the 1950s when there was only “One Unity”—known as “Unity School of Christianity.” Back then, what we now call Unity Worldwide Ministries was only “the field department” of Unity School. In 1966, Charles R. Fillmore, grandson of the founders and President of Unity School, issued “Directive 4” which severed Unity’s organizational control of the field ministries. He did this because he sincerely believed that the field ministries would be better off forming their own organization and managing their own affairs.

It just may be that Charles R. Fillmore perceived that Unity school’s declaration about the “true church of Christ” being not physical but spiritual was inhibiting the ability of the field ministers to attract people into their physical centers and churches.

If so, then we need to recognize the insight of Charles R. Fillmore. He perceived that the best interest of “One Unity” was multiple, independent organizations—what I call institutional pluralism. And he did not let his ambitions prevent him from doing the right thing for the ministers in the Unity movement.

OBJECTIVE: To briefly outline the background, the ideals, and the aims of Unity, and to correctly identify it as a non-denominational religious movement.

POINTS TO BE CONSIDERED:

NEXT WEEK: "FIRST THINGS FIRST" (Toward better understanding of God)

Download PDF of Introduction to Unity—A Synoptic Study of the Teachings of Unity in 24 Lessons—Lesson 1—What is Unity?