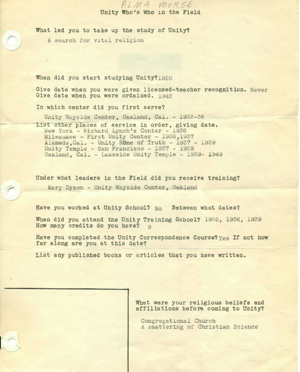 What led you to take up the study of Unity?
A search for vital religion

When did you start studying Unity?
1920

Under what leaders in the Field did you receive training?
Mary Dyson - Unity Wayside Center, Oakland

Have you worked at Unity School?
No

What were your religious beliefs and affiliations before coming to Unity?
Congregational Church
A smattering of Christian Science

Upon completing 4 years of college (U.of Cal.and Mills), plus a graduate /year for special training as a teacher, opportunity came for 2 years study of music in Boston and New York. Rented a room in home of a Unity student who introduced me to Richard lynch's Center. Found myself studying Unity even more assiduously than music. Upon returning home, asked for Guidance (in prayer) as to what to do with my life: teach school, continue with music, something else, possibly Unity? "Give me direct guidance upon waking". When I awoke - "Go see Mrs. O". "Why, I scarcely know her". "You asked for guidance". Obeyed, and during trip saw notice in window of a drug store regard to opening of Unity Wayside Center. Became soloist; in six months, teacher of Lessons In Truth class; in 18 months, Leader. Entire 18 months filled with constant experience of the Presence, unusual spiritual power, a great Peace, physical healing - and humorous things like constant uncanny "luck" at games, always winning the door prize - literally always- etc. First Easter service (1500 present) preceded by days of nauseating stage fright - prayed: "I'll be there and open my mouth to speak, you do the rest" Was met on platform by Him and His Peace - too deep and sweet an experience for description - the climax of 18 months faithful practice of the Presence (as per Bro. Lawrence) That experience is often repeated to this day in times of special need. He never lets one down!

Lad, "dying"of blood poisoning, family gathered round bed. Was called on phone to pray. Immediate cessation of all symptoms, family watching them subside moment by moment.

Baby "dying" of pneumonia, family and physician watching. In prayer ms led to recall her to acceptance of Life, obeyed, intuitively felt her reach for Life and take hold. By morning she was normal.

Man in great pain. Was called on phone at 3 A.M.. Had been ill myself, so felt unable to meet the issue. Turned it over completely to God and inadvertently fell asleep. One half hour later, an instantaneous healing was reported.

Center borrowed $10,000. Given ten years in which to pay. Paid in ten months. Center was given a $twenty-five thousand dollar pipe organ, a large stained glass window and much else. Bought a twenty one thousand dollar lot, completely paid for it in cash. About to break ground for new building. All accomplished through prayer and love offerings.

A woman came into church, led by another, practically blind. After service, asked for prayers for eyesight. The next Sunday she came in alone, read the responsive readings and hymns with the rest of the congregation. She was completely healed.

A man came to church, obviously a drunkard. I do not remember what it was that I said during my sermon, but inwardly I was praying for him. As he left he said it was the first time he had felt clean and good in many years, that was fifteen years ago. He has never wanted nor taken a drink since, been restored to wife and Lodge. He had had a police record.

Yes, God still cares for His own, and He it is who doeth the works.