The True Character of God

Sarah Scott's The True Character of God was referenced in James Teener's 1939 dissertation on Unity, p.133. He quotes from the 1927 edition of this tract. 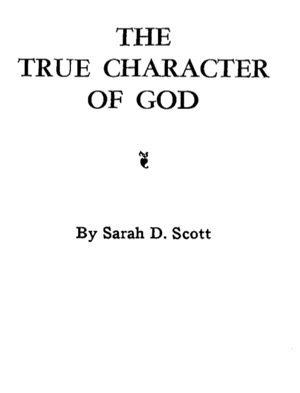 THE TRUE CHARACTER OF GOD
By Sarah D. Scott

SAINT PAUL, as he beheld Athens, the "city full of idols," felt that truly God was unknown there. Hence the altar with the inscription "To an Unknown God" struck him as particularly significant. Some Athenians seemed to feel the inadequacy of all their known deities, and were appealing to God, who they felt must exist, although they knew nothing definite about Him.

The building of an altar to an unknown god indicated that the people of Athens desired to know God.

The Hebrew concept of God grew from that of an early tribal god to that of a national deity who cared for the welfare of the Hebrew nation. Contact with other nations led the prophets to see that their God must be a god controlling the nations, if He was to guide the fortunes of Israel; while Jehovah was the God of the whole world, Israel was His particular care. Every age has a different conception of God, and as the idea of the brotherhood of the race has developed, the Christian idea has advanced.

Victor Hugo says, "All souls are God, all waves the sea."

We who are forging ahead see God as principle, law, being, mind, spirit, All-Good, omniscient, omnipotent, and omnipresent, unchangeable creator, Father, cause, and source of all that is.

Belief in a personal God has retarded the spiritual progress of the race. All ideas that limit God to form and locality lead to idolatry.

God as principle is the creative, underlying cause of all things. As law God is the unchanging rule of action inspiring the spiritual activity of Divine ideas to bring into manifestation a perfect creation, a perfect world. God is not circumscribed in any way; He has none of the limitations of personality. That God is mind is implied in the command that no graven image of God be made. The erroneous teaching that God is a personality is responsible for the belief that God is changeable, capable of being moved by our beseeching and by our imploring. Jesus restored the idea of universality when He proclaimed that "God is Spirit."

The idea of the immanence of God is as different from the popular conception of Him as noontide is different from midnight. It is so radically different that one who holds that ancient belief must put aside his old ideas of what man is, and raise him in dignity and potential power to a level that will at first seem startling; it means that God and man are but two phases of the one eternal life and consciousness that constitutes our universe. The idea of the immanence of God is that He is the universe; that the solar system is an emanation of the supreme Being, as rain clouds are an emanation of the sea, and that the relationship between God and man is not merely that of father and son but also that of ocean and raindrop. It is the idea that nothing exists except God; that humanity is one phase of His being, as the clouds are one form of the waters that constitute the sea.

The immanence of God is a conception of the universe that puts science and religion into perfect harmony with each other, because in that conception miraculous creation disappears and evolutionary creation takes its place. The oneness of life was asserted by Jesus.

Emerson's teaching of the immanence of God in the universe is unmistakable, in both his prose and his poetry. "There is no bar nor wall," he says, "in the soul where man, the effect, ceases, and God, the cause, begins." Still more explicitly he puts it:

"The realms of being to no other bow;
Not only all are Thine, but all art Thou."

Upon the unity of all life Christianity bases its declaration of universal brotherhood, regarding it as a fact in nature. The immanence of God gives a scientific basis for morality. The Christian concept is that men are separated in form but united in the one consciousness that is the life base of the universe. Their relationship to one another is somewhat like that of the fingers to one another; they are separate individuals on the form side, but they are united in the one consciousness that animates the hand. If we imagine each finger to possess a consciousness of its own, which is limited to itself and cannot pass beyond to the hand, we shall have a fair analogy of the unity and the identity of interests of all living things. Under such circumstances, an injury to one finger would not appear to the others as an injury to them all, but if the finger consciousness could be extended to the hand, the reality of the injury to all would be apparent. Likewise, an injury to any human being is an injury to the human race. The race does not recognize the truth of it because of the limitations of consciousness. Lowell put the fact clearly when he said:

He's true to God who's true to man;
wherever wrong is done,
To the humblest and the weakest,
'neath the all-beholding sun,
That wrong is also done to us;
and they are slaves most base
Whose love of right is for themselves,
and not for all their race.

Man inherits a perfect or divine mind and the power to make ideas manifest. Man inherits the perfect mind that is capable of knowing all things. God (perfection) is not out of reach, and we can understand God and His law, but not so long as we look upon Him or think of Him as something far above us or beyond our comprehension. In Spirit all things are fulfilled now, and the ideas that we hold in mind are the cause of all future manifestation.

Man has used his freedom of creative thought to shut off his clear vision of the true relationship between God and man. Being unwise, he still dodges the Truth that the inner Spirit would reveal, turning his attention to external things.

God is love; He is that from which all love springs. "Love is omnipresent in nature, as motive and reward. Love is our highest word and synonym for God." The highest manifestation of love is that within us which causes us to seek God. We love the good and the soul in which good abides. By our actions toward men we make known our feelings toward God; by our desires toward men we make known our love for God. Jesus taught that we should recognize our oneness with our source. When the Jews accused Him of blasphemy for making Himself God, He said to them:

"Is it not written in your law, I said, Ye are gods? If he called them gods unto whom the word of God came (and the scripture cannot be broken), say ye of him, whom the Father sanctified and sent into the world, Thou blasphemest; because I said, I am the Son of God?"

There is a place in the consciousness of man where the secrets of creation are no longer hidden from him, a place where, with quick perception, he recognizes that substance and supply, the Word and its fruitage, are united in one creative energy. It was this perception of the universal resource that enabled Jesus to feed the multitude, proving that the law of cause and effect was not interfered with by the limitations of time and of conditions.

Heaven is not far off but is in the soul of him who loves the right. The kingdom of heaven is a spiritual kingdom. It is the realm of divine harmony, where all the ideas of mind work together in divine order.

To study the ideas of Divine Mind will help to broaden one's conception and understanding of God. "When we have broken our god of tradition and ceased from our god of rhetoric, then may God fire the heart with His presence."

The voice is calling to each member of the race. Cease the profitless struggle of personal endeavor, and look to Him who is the transforming and the transfiguring power. This will insure speedy and absolute triumph. Look and live!

Lessons in Truth, by H. Emilie Cady, is written in language that is free from confusing terms and expressions, and it therefore adapts itself to the needs of beginners in the study of Truth.

It does not stop with beginners, however, for Lessons in Truth, once read, takes a firm hold on the mind of the student, and he will continue to come back to it, always finding in it some new thought to enrich his life.

This book, written in the form of twelve lessons with question helps, is valued as a textbook, but because of its genuine appeal it is also our most widely read book. Lessons in Truth is priced at $2.95 a copy.

Download a PDF copy of THE TRUE CHARACTER OF GOD