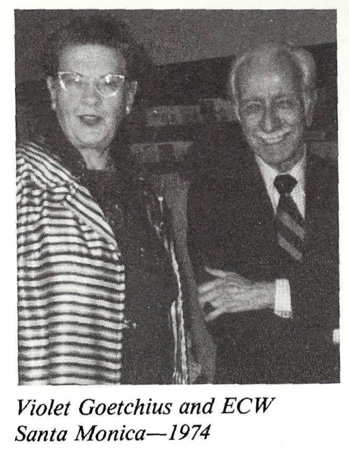 Violet Goetchius was ordained a minister in 1969.

When I try to tell you about one of the most effective and loved workers in the L.A. Unity ministry, the only word that seems to apply is anomaly. I’ve checked with Webster: “deviation from the common rule: something out of keeping, esp. with the accepted notion of fitness or order.” It doesn’t say somebody, but otherwise it is apt.

She was a large woman, close to six feet tall. (When she found a co-worker who was small in stature she described her companion and herself as “Little Bit” and “Quite a Bit.”) She had a roguish countenance, was addicted to flamboyant dress and glittery costume jewelry. Her speech was colloquial with a marked Brooklyn accent.

Her name, incredibly, was Violet.

“Violet!” Franklyn snorted, soon after she enrolled in one of his classes as a zealous student aspiring to ministry, “Magnolia I could imagine, but Violet! There’s nothing shrinking or demure about her.”

Well, there was; but you had to know her pretty well before you could descry that side of her nature. Nothing in her appearance helped us to discover what truly remarkable abilities and endearing qualities she possessed.

She made her own way in the ministry. She took all the study courses we could offer, augmented them by a visit to Headquarters for supplementary instruction. The written work she did was unimpressive, barely among passing grades. It was her contact with people, especially the sick, the impoverished, the elderly, that revealed a gift that neither Franklyn, Norma, nor I possessed in anything like the same degree. Moreover, she appeared to have boundless energy. She seemed tireless.

Her services to the congregation were invaluable. We were more than glad to offer her a salary and car allowance to take charge of our Hospital Ministry. Hospital workers from other Unity ministries sought her guidance and instruction. She cheerfully invited them to make the rounds with her—as far as their energies permitted—and they learned from her. What she had not anticipated, and became a cause for much special prayer and patience, was antagonism on the part of hospital chaplains, who resented her “taking over” their responsibilities. What finally won their acceptance was the realization that her stimulating effect on patients made their work easier.

She distributed vast quantities of Unity literature to patients—which might have been a prejudicial factor in the chaplains’ initial resistance to her efforts—and some of the recovered patients became her helpers in an extension of her ministry.

She saw that loneliness and inactivity needed healing too, and took over Church House for weekly meetings in which from twenty to fifty or sixty persons, mostly women, would meet for prayer followed by a protracted session in which some persons made garments for needy children, others dressed dolls or cut out and sewed stuffed toy animals. The men did chores, made coffee to wash down the sandwiches the workers brought with them, and mended and painted second-hand toys contributed by church members.

The group looked forward eagerly to the Christmas season when all their work would be displayed for the church members to see, and then distributed to institutions and individuals. This presented a small problem. There weren’t enough items for boys. She looked up a wholesale toy dealer in the yellow pages.

The proprietor was glad to provide these at the wholesale rate when Violet explained her purpose. “Also,” he said, “maybe some of your helpers could repair some of the damaged toys that we can’t sell.” She accepted them gratefully, and thus provided a special activity for the retired men who came increasingly as they were given something to do.

As Christmas time arrived, Vi invited the wholesaler to see what he had helped them to do. He was so impressed that he pledged that next year she could come and take whatever toys she could use—without charge!

From year to year this continued. “You’re making a believer out of me,” he exclaimed. “The more I give, the more I prosper. I’m going to have to build another warehouse!”

All this is fine, you may say; but isn’t it getting pretty far away from Unity’s basic teachings? Emphasizing material rather than spiritual help for human needs? Many people thought so. I did too, until I saw Vi in action. Whenever a group of people get together informally, working on projects in which they are more skilled than their teacher, they may not even think of how what they’ve read in the books or heard from the pulpit can be put into practice. Vi was quick to sense human rivalries that sometimes arose, and would call out, “Prayer time! Let’s drop our work for a moment and have a circle prayer together,” and in conclusion, “Now let’s carry the prayer over into our work.”

They were adding practice to precept.

A climax to this phase of the hospital ministry was reached when Vi decided to give a Christian dinner in Church House for all the helpers in the group. Ninety members attended. She invited the dealer and his wife to come as guests of honor. The speech he made after the dinner, thanking Vi and her helpers for the way his life and work had been enriched, was touching to many who attended—including me.

Many of the Christmas items were destined for the large children’s ward of one of the hospitals Vi visited. To reach the children’s ward she had to pass through a ward occupied by elderly women who were considered to be terminal patients. One of these caught sight of a doll in Vi’s arms. “Oh, let me hold it!” she cried, and snuggled it in her arms as if it were an infant. “Keep it, dear. It was meant for you,” Vi said.

The weekly work and prayer sessions in Church House, the preparation and distribution of clothing and gifts, the sorting and distribution of greeting cards, even the circle prayers, were all in addition to the steady day in, day out home and hospital calls, phone counselling, and letter writing that were the main work of Violet and others she trained to help. It is estimated that they contacted 35,000 patients a year.

The Hospital Ministry group became involved in another social service activity. The Buzza Cardoza greeting card company became established in Los Angeles and offered to turn over their discontinued items to us for distribution to hospitals, sanitariums, orphanages and correctional institutions. (It seemed a curious coincidence that as a young apprentice artist I had worked on their cards when they, and I, were located in Minneapolis.) Here was a new channel of service for the group. The cards and envelopes had to be sorted out for size and subject. It gave needed volunteer employment to scores of senior men and women, and brought cheer to thousands who received the greetings. Inspired by this project, a local automobile distributor donated a delivery truck to the church, which facilitated many other activities as well.