Was ordained in 1966, though she began working at Unity in 1940. Tait served as director of the Correspondence School Department, but primarily as an instructor for Unity School. She also wrote the book Take Command! Tait was affectionately known as “Miss Lessons in Truth,” due to her mastery of the Emilie Cady book Lessons in Truth.

Anyone who listens to these lessons by Vera Dawson Tait will know why Unity thrived in earlier times. We seldom see material of this type of quality.

When Johnnie Coleman was diagnosed with six months to live, she visited Unity Village for one week, "for a second opinion." According to the UFBL website:

The first person Johnnie met was Vera Dawson Tait, who had earned the affectionate nickname “Miss ‘Lessons in Truth,’” after the foundational Unity textbook she had mastered: H. Emilie Cady’s Lessons in Truth. She had quite a reputation as an effective teacher of the New Thought doctrines underlying Unity, the “Truth Principles,” as they were called. Here was a face framed in a perpetual smile as she spoke of the school and of Jesus the Christ. Here was someone (and in this she turned out to be typical) whose religion was anything but a burden or a cross of responsibility to be stoically borne. These people had chosen religion as their life’s work, and it was plain they had never thought better of it, never looked back.

I encourage anyone who knew Vera to add a comment below. 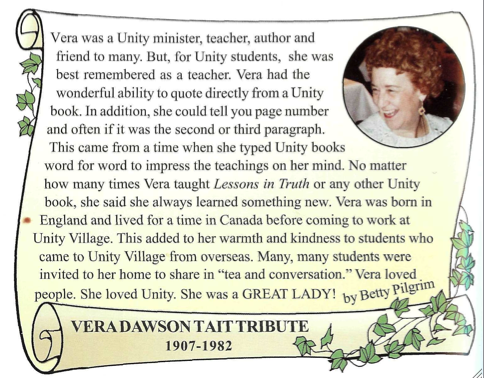 Vera was a Unity minister, teacher, author and friend to many. But, for Unity students, she was best remembered as a teacher. Vera had the wonderful ability to quote directly from a Unity book. In addition, she could tell you page number and often if it was the second or third paragraph. This came from a time when she typed Unity books word for word to impress the teachings on her mind. No matter how many times Vera taught Lessons in Truth or any other Unity book, she said she always learned something new. Vera was born in England and lived for a time in Canada before coming to work at Unity Village. This added to her warmth and kindness to students who came to Unity Village from overseas. Many, many students were invited to her home to share in “tea and conversation.” Vera loved people. She loved Unity. She was a GREATLADY!