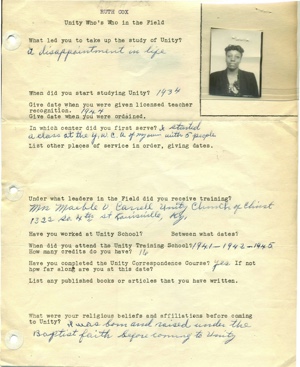 Here is the 1948 Field Department Survey for Ruth Cox, who became a Licensed Unity Teacher in 1944. She began her study of Unity in 1934 and first served Unity at the Y.W.C.A. with five people.

She received training from Mrs. Mable Carrell at the Unity Church of Christ, 1322 So. 4th St., Louisville, Kentucky. She also attended the Unity Training School in 1941, 1942 and 1945 and she had 16 credits. She also completed the Unity Correspondence Course.

Ruth Cox was born and raised under the Baptist faith before coming to Unity.

Her husband was healed completely from habitual drinking after Ruth and others prayed and treated for his recovery and helped him to believe that drunkenness could be overcome.

I have overcome fear of other people.

I am healed completely of that horrible thing for I know there is no person nor thing to fear.

There is only God.