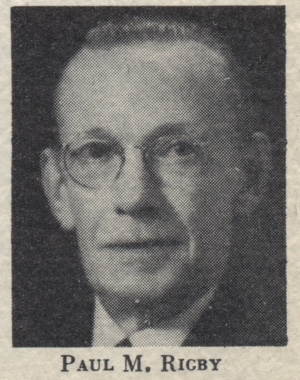 Paul M. Rigby was ordained in 1935. He is apparently the tall man shown in the middle of the ordination photo.

He is best known for conducting research for the Metaphysical Bible Dictionary. According to Ernest Wilson in If You Want To Enough (chapter 12 3rd paragraph in chapter), he was a "come-outer of the F.L. Rawson movement" prior to his work with the Metaphysical Bible project. Ed Rabel quotes Glenn Mosley in crediting his historical and etymological research and Dana Gatlin also credits his contribution to the MBD in Unity’s Fifty Golden Years (p. 94).

He served as the minister of Unity Society of the Northwest, Seattle, Washington from the mid 1930s until his passing in March 1945. He wrote an article for the July 1941 issue of Unity entitled The Law of Tithing. Katherine Schoonover said he taught and mentored her from 1943 until his passing (Field Dept Surveys).

Ancestry and Newspapers.com indicate Paul Maloney Rigby was born ca 1878 to Francis Rigby and Mary Bartlun Rigby, married to Lillyan Steilow Rigby, who co-ministered with him at Hl905 3d Ave in Seattle, and died in Seattle, Washington on March 9, 1945.