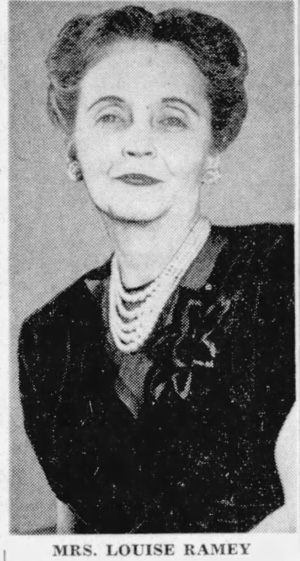 Louise Ramey was ordained a minister in 1935. She was born in 1892 in Florida and lived to be 102 years old, passing November 13, 1994. What we have from Unity is her ordination photo and two listings in the Unity Annual Yearbook, 1936 and 1946, showing her as the minister of First Unity Society. We also have information about her from Gail Harley’s biography of Emma Curtis Hopkins and also from a narrative attached to her FindAGrave listing.

Gail Harley writes in her biography of Emma Curtis Hopkins that she met with Louise Ramey in 1990 when Ramey was 98 years old. Harley met with her because she had hoped Louise could provide some information about ECH. Harley writes that Louise P Ramey came from a prominent Tampa family and went to Unity to study for ministry. She did not know Emma Curtis Hopkins (ECH passed in 1925) but she did study closely with HB Jeffrey, a student and colleague of ECH. She also studied with both Myrtle and Charles Fillmore. Harley writes that many years later (in the 1980s) she returned to Unity Village for a vist accompanied by her grandson Stephen. She attended a Methodist church because it was supportive of a school she supported (presumably Bayshore Christian School).

The FindAGrave biography says that Louise Ramey was at one time the top woman business executive in Tampa. She started in 1920 as a saleswoman for an outdoor advertising company and worked her way to become the majority owner by the time it was sold in 1975 for $9 million. Well into her 90s, she drove, attended basketball games at Bayshore Christian School and worked out at the YMCA three days a week. As a centenarian, she could touch the floor with her palms when people half her age had trouble reaching ankles. She was president of the YWCA of Tampa, a United Way board member, a founding member of the Tower Club, and belonged to the Azalea Garden Circle, the Pilot Club, and the Palma Ceia Golf and Country Club. She was a member of Bayshore United Methodist Church and an ordained minister in the Unity Church. In addition to her grandson, she is survived by two granddaughters, Gaile Ramey of Westport, Conn., and Paige Ramey of San Francisco; and numerous nieces and nephews. 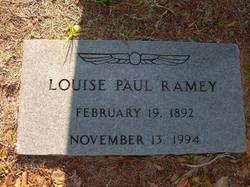