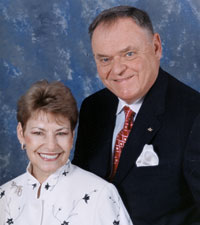 Nothing explains why religious movements grow more than the level of religious commitment among its members and leaders. High commitment movements may stumble, but they never grow without commitment. Unity began as a high-commitment movement. Truth, for Myrtle and Charles, was serious business. And, at least in American culture, the period of fifty years is an accepted standard for what we recognize as commitment and dedication.

Last August I visited Larry and Mary Ellen at their church in Tucson where Larry sat down with me for this interview. You can click on the links to the right to watch Larry talk about fifty years of ministry. I wish I were in Tucson this Sunday morning to celebrate with them. But I will call and send them a letter to thank them for their half-century of service. I hope you will do the same.

Larry and Mary Ellen Swartz are ordained Unity Ministers who have served Unity of Tucson since May 1, 1966. Both Larry and Mary Ellen have a background in Silent Unity (the prayer ministry of Unity School of Christianity) where they worked and received the majority of their ministerial training. Under their guidance, Unity of Tucson has made two major moves within the city. 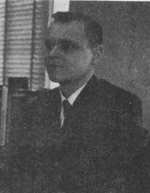 In addition to his local ministerial duties, Larry who was ordained in 1966, has served in various capacities and offices within the Southwest Unity Region, International New Thought Alliance, and the Association of Unity Churches where he has served as its President. Mary Ellen, ordained in 1972, devotes her time in addition to ministry to counseling, biofeedback training, various administrative Church duties, and being the mother of their three adult children and now two grandsons.

Together they serve the Unity message in Tucson and continue to offer a ministry of “love, inspiration, learning and healing” through Sunday lessons, classes, counseling and a type of leadership that helps people get in touch with their God potential thereby changing their lives. They make Christianity truly practical and understandable.

Larry grew up in a Unity family out in Washington State and he attended Dr. Herbert Hunt's center in Spokane prior to his experience in the United States Air Force. He was born in Yakima, Washington, and when time for college came he attended Monterrey and Cabriallo schools at Santa Cruz, California. His college years were, however, divided by the four-year interval of his Air Corps service. He had a brief, if varied, business career, mainly production line and selling. 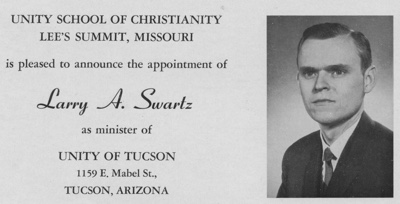 Larry has the unique distinction of having served as the president of three organizations — the Association of Unity Churches, the International New Thought Alliance and the Independent Association of Ministers in Unity. His service to the AUC began soon after finishing training at Unity coming to Tucson, beginning with the Licensing and Ordination committee and progressing to the organizational leadership. He was the President of the INTA in 2015 when he delivered the keynote address at their 100th Conference celebration. He continues as a board member of the IAMU. 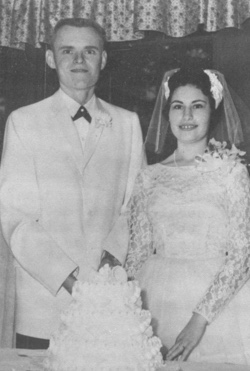 After becoming a student at Unity, Larry met Mary Ellen Martin, who was working at Silent Unity while studying to become a teacher-counselor. They were married in the Silent Unity Chapel on May 19, 1963 by Dr. Herbert Hunt and a reception was held at the Unity Clubhouse.

Larry and Mary Ellen are the parents of three children and the grandparents of two grandchildren.

Visit Larry’s Blog called Larry’s Thoughts – This online journal is a collection of his views and opinions as we learn to accept our Oneness with God.

Download an MP4 video file of the entire interview (352 megabytes)

00 Larry's call to ministry
01 Sig Paulson as mentor
02 Speak of mentors in the present tense
03 Partnership with Mary Ellen
04 Three-year ministerial training
05 The importance of George Lamsa
06 The Bible and Unity
07 The Bible interpreted metaphysically
08 Growing up in Unity
09 Seeing the Unity tower at 14-years old
10 Sue Sikking and her family
11 Lowell Fillmore
12 May Rowland
13 What is the INTA?
14 Blaine Mays
15 Advice to prospective ministers
16 Advice on working with boards of trustees
17 Fostering prosperity consciousness in the church
18 Why spiritual communities are important
19 On having a strong spiritual leader
20 An early decision about the call to a ministry
21 Three locations for Unity of Tucson
22 The blessing in long-term ministry
23 The financial benefit of long-term ministry
24 Larry and Mary Ellen's family
25 How Unity Tucson contributes to the community
26 Acceptance of all without judgment
27 Reflections on marriage and ministry
28 Marriage, family and ministry
29 Raising children in a ministry
30 Unity's world message, part 1
31 Unity's world message, part 2
32 Birth of the Assoc of Unity Churches
33 Larry's service to the Assoc of Unity Churches
34 Early challenges to the Assoc of Unity Churches
35 How do Unity ministers work together, ideally?
36 The founding of the IAMU
37 Serving AUC, INTA and IAMU
38 Joel Baehr
39 Johnnie Colemon
40 Catherine Ponder
41 The unsung heroes of Unity
42 Lola Pauline Mays
43 Paolo Soleri bells
44 Church foyer
45 Flags in sanctuary
46 Tour of Sanctuary
47 Harmony Hall
48 The Ramada
49 The children's school
50 The Annex
51 Front landscaping
52 Bookstore and Flora Lacroix paintings
53 Mary Ellen Swartz

If you have been inspired by the content of this page, then why not consider making an offering to Unity Tucson?