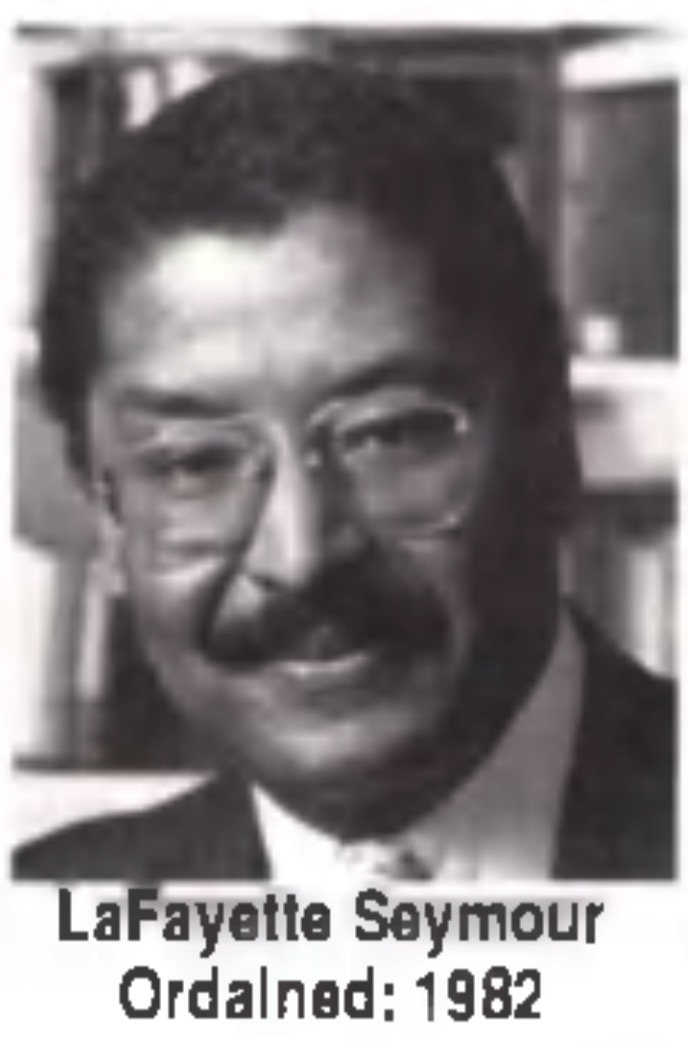 LaFayette Seymour is profiled here because he is a Unity minister who was ordained in 1982. But he deserves our attention because he was a true “renaissance man.” His experience, his skills, his interests and his insights are as broad and deep as can be found anywhere in Unity’s history.

Rev. LaFayette’s education ran from Arkansas to Fisk, to Harvard, to Howard and also to Unity along the way. He lived and served in three continents. He was a director in the Peace Corps, he served as a high school principal and as an international educational consultant, he served in urban government and he founded a Unity church in the Nation’s Capital. His religious journey spanned evangelicalism (ordained a baptist minister at 20), Islam, Kaballah and Ancient Egyptian Metaphysics and, eventually and finally, Unity.

At the same time, he was a devoted husband for over fifty years and raised two children. His religious quest ended when he found Unity and he founded a church and served our movement for nearly forty years.

I am personally inspired each time I read his life story or listen to the lesson he gave at the 1998 Fillmore Festival. He exemplifies for me the “renaissance” nature of the ideal life of a Unity truth student: broad, diverse and deep while also dedicated, still and focused. I encourage you to get a cup of coffee, read his bio and listen to his talk.

I also invite followers, friends and family of Rev. LaFayette Seymour to post a comment to this page or to contact me at mark@truthunity.net. Click for more information and resources about African Americans in Unity and for the Gallery. 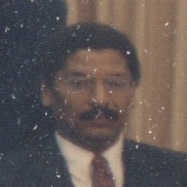 The photograph of LaFayette you see is from Unity's 1982 ordination photos. He is in the front row, first person on the right. We also have a special resource that opens our consciousness to the insightful experience of LaFayette Seymour: His 1998 talk at the Fillmore Festival on Matthew 9—Love and Forgiveness. We also have two biographies of Rev. LaFayette, one from a 1992 article in The Washington Afro-American, the other from his 2018 obituary. 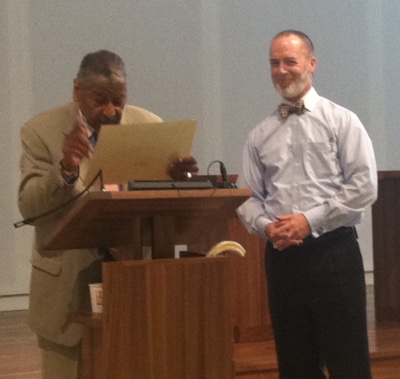 Choice Decrees From the “Presence”. A 43-page booklet filled with affirmations that LaFayette would recite with great power.

The Formula for Fortune. A 28-page booklet by LaFayette for observing the vernal equinox, summer solstice, and winter equinox; Zazen meditation techniques; extensive notes on a proper diet, especially for cleansing the liver; and other valuable wisdom of the ancients for enriching the quality of our lives.

Read Matthew Chapter 9 with links to the Metaphysical Bible Dictionary

Here is how a “renaissance mind” conveys the Unity teaching. Each segment is an essential component of the Christian faith. But, when combined and delivered in one setting, these segments convey an entirely new perspective, or rebirth, of the historic Christian faith. What we have here is a step-by-step explanation of Metaphysical Christianity—what it is, how it works and what we are called to do.

Listen to a segment and pause the audio. Consider the power and uniqueness of each segment. And, when you are finished, make the commitment that Rev. LaFayette is leading us to make: to allow the cosmic Christ to fill our world with love and to close the door to everything else.

Minister of the Week
THE REV LAFAYETTE R. SEYMOUR

The Washington American Newspaper is pleased to have The Rev LaFayette R. Seymour, a native of Memphis, Tenn, as its Minister of the Week. Rev Seymour returned to Washington in 1982 and founded the Unity Center of ( Truth in the Nation’s Capital after a 20 year search for answers to theological and philosophical questions which had not been answered in his Baptist training nor in his studies at Harvard University Divinity School.

Rev. Seymour was ordained as a Baptist minister in 1959 at age 20. He attended and completed his course of study at the Divinity School at Harvard University but did not feel that he was ready to take on the responsibility of leading people.

In his quest to seek knowledge and find the answers he was looking for, he joined the Peace Corps (the first African American to serve as a volunteer) and was sent to West Pakistan. While there he discovered Islam which he studied along with Kaballah and Ancient Egyptian Metaphysics at the University of S.I.N.D).

Upon leaving the Peace Corps, he pursued his interest in the Islamic religion and became a Muslim. Rev Seymour said that he soon found that even with this wonderful experience as a Muslim, he could not find what he was looking for—something was still missing.

His outward search for answers continued as he worked in New York as Deputy Director for JOIN (Job Orientation in Neighborhoods); returned to the Peace Corps as a Director in India and Nigeria. Returning to this country, served as an Administrative Assistant to Marion Barry who was then the Director of Pride, Inc. He went back to school and received a Master’s Degree In Public Administration (MPA) from Howard University.

Rev Seymour, still unready to accept his religious calling, served as a principal of the newly established Adams Community School, one of the 12 schools in the country experimenting with Community Controlled schools.

After leaving the D.C. School System, he set out again, searching for answers. He traveled to the West Indies where he served as Education Advisor to the newly Independent Nation of St. Vincent. There he continued his search. He returned to the U.S. in 1978, and was walking down a street in Miami, Fla. when he heard the most beautiful music coming from a church. He soon learned that it was the song used to conclude each Unity service, (“Let Peace Begin With Me.”)

It was here that he learned about Unity. This religion represented a ‘New Thought.’ Its teaching did not represent the old way of thinking about God and Good and Truth. “It represents the God within us and not the God out there,” Rev Seymour said, “He is within us as the Christ. For all that we need and require and desire we go to that Christ in prayer and meditation and bring forth in our lives all the good, all the power, all the peace, all the supply, all the help that we need and desire,” he added.

At last, his 20 year search was over. The answers he had sought were found within himself. The Source and Power of God’s goodness was found within his own being. He became a Unity minister in 1982.

It was this realization that led Rev Seymour to found the Unity Center of Truth. Early on there were just a few members. Today, because of his teaching and preaching the membership now stand at 550. Not only does he teach and preach the Unity new thought, but he lives the life which exemplifies these teachings.

According to Edith B. Sloan, the Legal Counsel and Assistant Minister of the Unity Center said, “Rev Seymour has a very charismatic personalty. He draws people to him. Some ministers have a very superficial knowledge, but he has a certain depth to his intellect,” she added.

The Unity Center for Truth in the Nation’s Capital, housed in First Congregation, 945 G Street, NW, is one of 700 Unity Churches located in the United States. The Unity Center offers classes in metaphysics, miracles, unfolding consciousness and metaphysical interpretation of the New and Old Testament There is no fee, however, the nonprofit church encourages support through donations, offerings and tithes.

One of the Center’s outreach programs involves an agreement with UDC. Through this program, the Unity message, teaching the spiritual basis for self-esteem, is taken into area junior and senior high schools. The student, teachers and administrators attend sessions on a volunteer basis after the regular school day.

Rev Seymour hopes to have a new facility by 1996 that will enable him to offer more programs to the community and to have space for more classes where the principles of Unity can be taught not only to adults but to young people as well.

He is married to the former Barbara LaRoach of Charleston, S.C. and they are the parents of two children, Allison and Sekou.

Persons interested in learning more about The Unity Center of Truth in the Nation’s Capital are invited to attend services on Sunday from 12:15 to 1:15 p.m. at the First Congregational Church. Classes are held before and after the service and during the week. Call (202) 628-3755 for more information.

Reverend LaFayette Rene Seymour was born and raised in Memphis Tennessee. The youngest of Robert and Mary Seymour's seven children, LaFayette excelled in school and finished at the top of his class at the legendary Booker T. Washington High School. LaFayette attended the University of Arkansas at Pine Bluff, graduating with a Sociology Degree. It was at Fisk University, in pursuit of a Masters in Sociology, that he met the love of his life, a young, intelligent beauty from Charleston, South Carolina named Barbara Ann LaRoche, who would become his wife of more than fifty years.

LaFayette entered Harvard Divinity School but left to pursue another calling in the newly formed Peace Corps. He served his first mission in West Pakistan in 1962. In 1965 he and Barbara married and soon after they traveled to Nigeria where LaFayette served as a Director with the Peace Corps in the West African country.

After serving a third mission with the Peace Corps, this time in India, the Seymours came back to the United States settling in Washington, DC. with two children, Allison and LaFayette Jr. The senior LaFayette held several positions working at the grassroots level in local government and community activism in the 1970's, including PRIDE, Inc., whose aim it was to help unemployed and marginalized African American men find work. Seymour's journey and love of young people and education would eventually lead him to become Principal of John Quincy Adams Community School in NW Washington, DC.

Raised in the Baptist faith, Seymour became interested in New Thought and Unity while spending some time in Miami, Florida. He recalls the moment fondly, "I was walking along this street when I heard some beautiful music coming from this building. I explored it further and it fascinated me. So I spent some time reading about Unity and talking to the minister. Soon I became a clerk at the church and became a minister in 1982. It filled a large hole in my life". Seymour's search for truth would ultimately lead him to Unity Village and Ministerial School in 1980.

Like his old days at Booker T. Washington High School, LaFayette was a leader at the esteemed center of progressive thought by serving as President of his 1982 class. From Unity World Headquarters, Seymour traveled back to the Nations Capitol to start a new Unity Center in the heart of Washington called "Unity Center of Truth" in the Nations Capitol which thrived for many years with a robust congregation. Even after retiring from the pulpit, Reverend Seymour continued to spread light and love through the teachings on Unity at Community on the Hill [now Unity Center DC] as a regular guest minister until the age of 76 in 2014.

Until his transition, he continued to live by the Ancient Egyptian aphorism, "Know Thyself."

LaFayette's life will be celebrated on September 8th at 11am in a private ceremony at Unity Center DC. Source: https://www.mcguire-services.com/obituary/LaFayette-Seymour