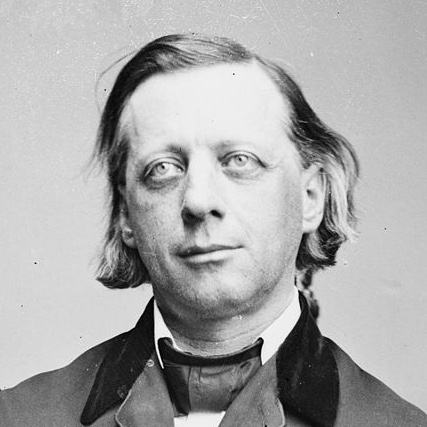 Henry Ward Beecher was a 19th century Protestant minister who was an important influence on Charles Fillmore. His liberal theology of a Gospel of love, not depravity, made him The Most Famous Man in America.

I became aware of Henry Ward Beecher by reading what Charles Fillmore had to say in The Household of Faith, which is an earlier edition of The History of Unity:

I can remember with what satisfaction I used to imbibe the assumed wisdom of freshmen teachers. I knew nothing about God because I had never made an effort to get acquainted with Him and in my egotism, I said, ‘All these people that think they are in communion with God are deluded; I have never seen God. I believe in things you can see and I will take the testimony of Bob Ingersoll, who says you cannot know God, rather than that of Henry Ward Beecher, who says you can.’ (Household of Faith p.172)

I hope you will click through to read the rest of what Charles Fillmore has to say. Beecher convinced Fillmore to set aside the nontheist belief of Bob Ingersoll in a distant, impersonal Diety and to embrace Beecher’s belief that God is real, personal and present. Charles continued:

I want to add my testimony good and strong with those who have said I know God. I talk and think to God, and He flashes His ideas into my mind... Don’t let the fool say in your heart, ‘There is no God’ (Psalms 14:1). I let that kind of fool talk in my heart and it set up a current of thought that kept me for years speechless in the presence of God.

Henry Ward Beecher had died a few years before Charles Fillmore read his writings. Beecher was by the mid 1870s, as the book by Debby Applegate says, the most famous man in America. I have seldom enjoyed reading a biography as much as I have enjoyed reading her book. It’s filled with details about the shift from Puritanism to liberal religion, about the western expansion of religion where Unity was founded, about the impact of church and religion on slavery, abolition, prohibition, and women’s suffrage, about the shift in social norms regarding sexual freedom, and about changes brought about in religion by population shifts, new technology, emerging media and economic growth. It’s a wonderful read, sprinkled with witty quotes by Beecher himself and by two of his admirers, Abraham Lincoln and Mark Twain. Buy or borrow this book; you will enjoy every page.

Henry’s story has four main stages: (1) early life and training to become a Congregational minister in Connecticut and Massachusetts, (2) early career as a Presbyterian minister in the primitive frontier region of Indiana, (3) an immensely influential career as an abolitionist minister and writer while serving as the minister of Plymouth church in Brooklyn and (4) a celebrated post-war, Gilded Age career as a public speaker, social critic, liberal theologian and accused adulterer.

What we can learn from Henry Ward Beecher

Here are three things we can learn from Henry Ward Beecher: (1) the man had a message, he knew what his message was and he lived his message; (2) he saw above the social and political fault lines of his time in a way that enabled him to speak to the the issues, not for the masses; (3) he understood and was willing to use the prominent forms of media of his time.

(1) The Gospel of Love. Beecher was raised as a Calvinist, but he became an apostle of the Gospel of Love. Applegate quotes Henry: “It is Love the world wants... Higher than morality, higher than philanthropy, higher than worship, comes the love of God. That is the chiefest thing” (p. 13). Applegate says that, early in his career, Henry had a conversion experience where he had an “overwhelming revulsion in my soul and I said to myself ‘I will work for the poorest of [God’s] creatures’ ... from this day Henry made it his special mission to reach the hardest, most despairing of sinners” (p. 175).

What is really interesting, and inspiring, is the influence of his father, the old-time puritan preacher, Lyman Beecher. Lyman Beecher loved his children, immensely, and it shows up in the creativity and fruitfulness of this twelve children. As I read the book, I was constantly reminded that, regardless of what we may believe and preach, our influence is how we see and act with those in our proximity. Lyman Beecher preached depravity, but he passed on to his children a sense of human divinity. Lyman’s old-time puritan beliefs have long passed, but his old-time love of family continues to flourish—through his children, through the message of Henry Ward Beecher, and, arguably, through the message of Henry’s readers, one of whom is Charles Fillmore. It reached me and, hopefully, it is reaching each of you right now.

(2) Above the political fault lines. Henry Ward Beecher stepped into pulpit ministry when political and social divisions were tearing American society apart. Beecher spoke to the issues, and he did so emphatically. What he did not do was to speak for the masses. Debby Applegate characterizes his approach as reform, not revolution, but with radical methods. She says, “if Beecher was more of a reformer than a revolutionary in substance, his methods of persuasion were considered radical” (pp. 5-6).

Applegate describes several times when, at his Brooklyn church, Beecher brought an enslaved girl to the platform during a Sunday sermon and began, then and there, an auction to raise funds for the girl’s freedom. Speaking with the rapid tongue of an auctioneer, he would make reference to the lurid purpose the girl represented to a future owner. Because of such methods, Beecher became one of the most hated men in the Confederacy, even though he was not an abolitionist like William Lloyd Garrison.

Then, as now, the political and social fault lines were considered too great to bridge. The 19th century fault lines can be confusing today because they carry labels which no longer apply, but they are with us still. Applegate says that underlying the labels are on one side those who, then known as Democrats, are concerned about tyranny of the economically privileged, the social elites (like meddlesome ministers) and the politically powerful. On the other side were those who, then known as Whigs, are concerned about disorder, anarchy and immorality. (p. 182)

What we can learn from Henry Ward Beecher’s ministry is that because he did not speak for the masses he was able to speak freely to the issues, and he was able to do so in radical ways. By not speaking for anyone but himself, but rather by speaking to personal issues of freedom as well as immorality, and using methods like a slave auction, Henry was able to engage people at a human level instead at a political or social level, and to convince many to support the war effort to end slavery.

(3) Use prominent forms of media. Debby Applegate writes “By common consensus, there were three sure paths to public acclaim in the nineteenth century: the Pulpit, the Platform and the Press” (p. 215). Her book describes how Beecher’s talent as a pulpit preacher was easily carried over to other forms of media that provided entertainment and education as well as spiritual content. Those other forms included the platform of public speaking, to which Ralph Waldo Emerson utilized when he left his ministry, and the press of newspapers and magazines, such as the the New York Times and Atlantic.

Much of Henry’s career was supported by articles published in newspapers owned by those who supported his pulpit ministry in Brooklyn. Publishing augmented his pulpit ministry and it was publishing that made him so famous and influential that Abraham Lincoln declared that it was the inspiration of Beecher’s published sermons and writings that held together the northern cause during Lincoln’s presidency (Applegate p. 6). Toward the end of Henry’s life he founded his own magazine, The Christian Union, later edited by Lyman Abbott, who succeeded him at the church in Brooklyn. Lyman Abbott’s career was also influential and his writings were read and quoted by Emilie Cady in Lessons in Truth.

As I said above, Henry Ward Beecher’s message was a Gospel of Love given to “the poorest of [God’s] creatures” and he “made it his special mission to reach the hardest, most despairing of sinners”. Today, the unserved flock is online. Let me repeat: today, the unserved flock is online. Those who come to your church are fine people, but they aren’t your unserved flock. Rather they are your interested flock, the friendly flock. They are friendly and interested, but they don’t need your church, nor do they need you. Henry Ward Beecher was willing to shift much of his focus from ministering to his congregation to ministering to the world. We must do the same.