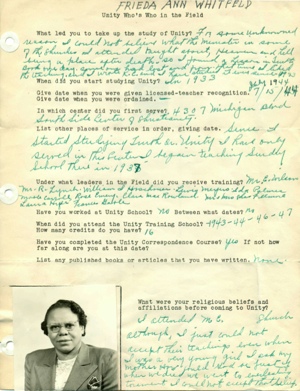 Here is the 1948 Field Department Survey for Frieda Ann Whitfeld, who began her study of Unity in 1933 and became a Licensed Unity Teacher July 15, 1944. She served Unity in Chicago at The SouthSide Center of Christianity, 4307 Michigan Blvd as a Sunday school teacher, beginning in 1937. She is listed as a Licensed Unity teacher in the 1946 and 1956 Unity Annual Conference Yearbooks.

Frieda Ann Whitfeld initially took up her study of Unity after finding a copy of Lessons in Truth. She had rejected the teaching of many churches about heaven and hell and wrote to Unity for more materials. Prior to coming to Unity, Frieda Ann Whitfeld had attended the Methodist Episcopal Church. She wrote,

Frieda Ann shares a moving story about her father showing up at her door at a time when she greatly needed him and she remarks how this happened after reading Emilie Cady's writing about how man must stand alone with God. She also share numerous stories about relying on Jesus Christ as her healer and relying on the Jesus Christ Principles. She worked as an infant nurse.