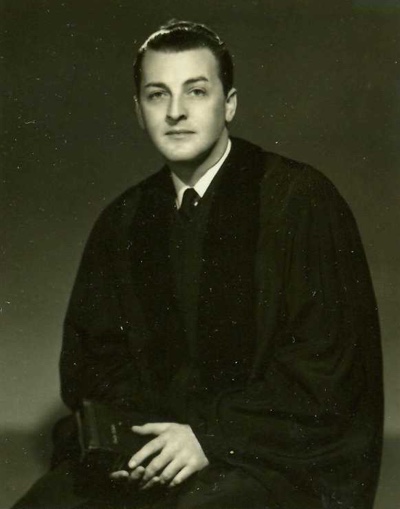 Clyde Franklyn Kelly was ordained a minister in 1949.

Franklyn Kelly was one of the most unforgettable characters to have a place in my personal life. From the time of that first meeting in Detroit, it appeared that we were to have an important place in each other’s life. Margaret and Adonna had forecast it years before we met: “You ought to know Pat,” as they called him. “You would be great friends.”

We became friends, truly, but it wasn’t just friendship; it seemed more like destiny; as if there were something we were supposed to work out together, weaknesses to be overcome, abilities to be enhanced, a mission to be fulfilled. We were of contrasting temperaments. They sometimes clashed. He was often impatient with my deliberateness in making decisions. I felt uncomfortable by his tendency to dramatize.

Nothing ordinary ever happened to him. He lived in a realm of superlatives. He was handsome, romantic, dramatic, moody—and insecure. At his best he was a delightful companion; at his worst, deplorable. Bert Perks, who was attracted to our ministry by hearing Franklyn on our radio program and became one of his close friends, put it this way:

“You may like him or dislike him, or both by turns, but you can never be oblivious of him. It’s that temperament that enables him so to move people by his singing. If a person has it in him it can be modified; if he doesn’t have it you can’t inject it. That and his God-given voice is what makes him so effective as a singing minister. You and he are contrasting personalities. You tend to underplay, and that has an appeal; so you make a good balance for each other.”

Right or wrong about me, I could see how right Bert was about Franklyn. His enunciation was so clear that the hearer got every word without strain.

“You sing the message as well as the melody,” I remarked to Franklyn early on. “Have you always had that ability?”

“No,” he said. “While I was singing in the St. Louis production of The Student Prince, I heard of a famous local voice coach and applied to study with her. Her first assignment was to have me work on the hymn, “In the Garden.” Twenty-five dollars and a half-hour for that! I thought. She sensed my reaction. ‘Let me sing it for you,’ she said, and did so—with such feeling that I was moved to tears. It was the greatest lesson I’ve ever had.”

He “had it in him” as Bert asserted. “It” was no doubt developed in his New York light opera days, when among other engagements, he served as Allan Jones’ understudy. “That ex-miner was so everlastingly healthy that I never got a chance to replace him even in a matinee performance,” Franklyn complained to me.

When, in our services, he introduced the container that held requests for prayer, he would describe it as “God’s sacred chest of remembrance,” before placing it on the altar table with ceremony befitting The Holy Grail. (I simply called it our Prayer Box!) When he fed his two little dogs, it was with all the unction of Franklin Roosevelt passing a Thanksgiving dinner to the orphans. Julio Carminati observed, “If Pat fell into a sewer he would bob up in an immaculate dress suit.” 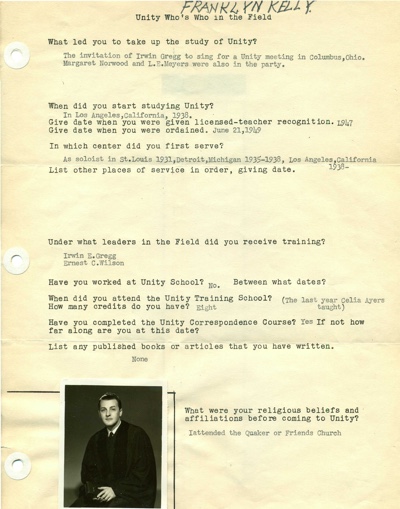