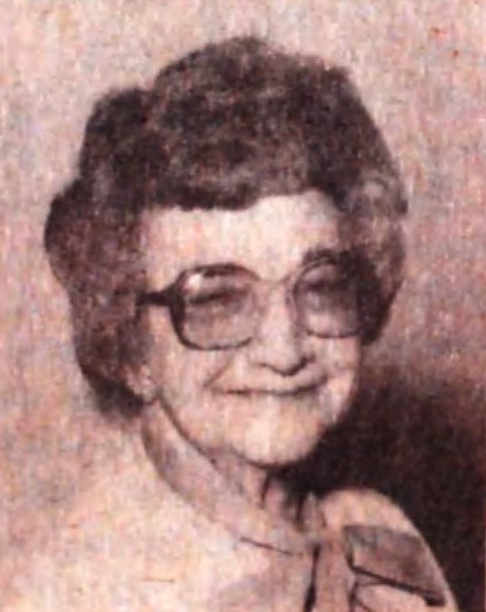 Amalie Frank was a Unity minister from Baltimore who served in Washington DC (1976), Evanston, Illinois (1978-1980) and Lansing, Michigan (1980-1982). She returned to Washington DC in 1983 and later served at the Unity Center of Light in Glenn Burnie, Maryland. Several articles in the Baltimore Sun show that she began speaking in Unity churches in the early 1960s under the supervision of Ann Sandefer. She is not listed in the UWM list of ordained ministers.

She is the author of Amalie's Good Words: Signposts for the Journey. She made her transition in 2004 at the age of 93.

Here is more information semt to me by a long time member of Amalie's church in Washington DC.

In June, 1983 Amalie Frank came to serve as minister of the Washington, D.C. Unity Center of Christianity. Her outstanding reputation for growing Unity congregations had preceded her to Washington. She was already known in Unity circles as a talented, professionally trained musician with an enthusiastic, down-to-earth teaching style. When Amalie accepted the invitation to serve as Minister in Washington, D.C. it was after she had completed a series of eman [SIC] in Michigan on October 30th, 1976. Afterwards she stated “I cannot help but feel especially blessed by this extraordinary event.”

When Amalie Frank arrived in Washington at the age of 73, she had retired in 1972 from a teaching career of 20 years and 40 years of service as an organist and choir director. In those same years, she also had successfully raised her four children: Paul Jr., Amalie, Roberta and Gloria.

A native of Baltimore, Maryland, Amalie completed elementary and high school there; earned her teaching certificate in music education and a joint under-graduate degree from Peabody Conservatory of Music and Johns Hopkins University; as well as, a Masters Degree in Music Education from the University of Maryland. She taught English and Music in the Baltimore City Schools until 1935 when she and Paul Frank married and started their family.

In telling the story of how Unity had become so important in her life, Amalie recalled it was Easter of 1951 when she first fully understood the meaning of the words, “Be ye transformed by the renewing of your mind.” (Romans 12:2) A friend had sent her a subscription for The Daily Word. She told how the message she received from it was entirely different from what she had known before. She immediately learned the key lesson: “You create your life with your thoughts. You are responsible for everything that has happened, is happening, and will happen to you. There is a Higher Power which most people call “God” and it lives within you!”

This significant new awareness and its very powerful lessons came to Amalie at a time when she felt overwhelmed by the challenges her family was facing. She and her husband were struggling with the effects of his alcoholism; there was a constant lack of money; and, personally she was very unhappy. In addition to the Daily Word her friends surrounded her with lots of information about Unity and its activities. She began attending Unity lectures in downtown Baltimore and devoted time to studying Unity literature and teachings.

Gradually, Amalie came to accept the idea that she alone was in control of her mind and the unhappiness she was experiencing was the result of her own reactions to external events. She made consistent, conscious efforts to re-direct her thinking toward more loving feelings and reactions. She focused on living her life from the Unity perspective —the idea that health, prosperity, and spiritual well-being are available via a conscious mind that is one with God.

As she put these ideas into practice, Amalie’s life became less stressful and she came to be more at peace with herself and her family. Soon she returned to public school teaching and completed a Master’s degree in music education. By 1965 she had become a licensed Unity teacher and had written articles which were published in Unity Magazine and Weekly Unity. However, she did not begin her career in Unity ministry until after 1970 when her husband died and when she had retired from teaching in 1972.

When Amalie came to the Washington, D.C. Unity Center of Christianity she brought her musical talent and her message of joy and openness to the diverse, lively congregation she found here. Her enthusiastic, occasionally un-orthodox messages attracted many new congregants. She usually spoke while standing close to the edge of the stage rather than from behind a pulpit or lecturn. Amalie might begin her message on any topic, but in the course of delivering it, she always found a way to thread the central focus of her ministry through it: “You create your life with your thoughts. You are responsible for everything that has happened, is happening, and will happen to you. There is a Higher Power which most people call ‘God’ and it lives within you!”

In this regard, Amalie Frank brought a very special gift to her ministry. She knew how to translate into everyday easily understood language for others what she had learned from her personal experience of having to realize the part her thoughts and feelings played in creating her life.

She was very proud of the church’s music ministry which was directed by concert pianist Michael Patterson. The congregation was inspired and delighted by performances of the forty voice choir that he directed and the solo performances. From time to time there were Sunday afternoon concerts and opera performances.

In 1990, the name of the center was legally changed from the “Unity Center of Christianity” to “Unity of Washington, D.C.”