Welcome to the TruthUnity
Statement of Faith Page

Charles Fillmore wrote the thirty-two Statements of Faith in response to fundamentalist and evangelical Christians who criticized Unity as abandoning the doctrines of Christianity. Charles responded that he had not abandoned the doctrines of Christianity and that he was fully comfortable with the traditional language of his day, spiritually interpreted. His point was that Truth transcends language.

By assembling this page on Unity's Statement of Faith I hope to convince you that what is important today is not doctrine, nor language, but seeing with the single eye of Truth. Peace, be still, and know that there is Truth contained in these thirty-two statements, if you will approach them with wisdom and understanding. Think twice before rejecting twenty centuries of Christian spiritual teaching. It is not that there is not Truth in the many other books we read, but these statements are condensed packets of Truth that have guided millions for centuries and that will reveal their Wisdom to you today.

Controversy over Removal of Statements 28 and 29 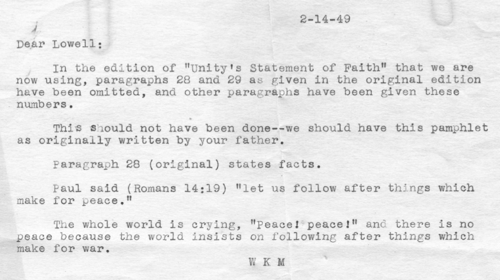 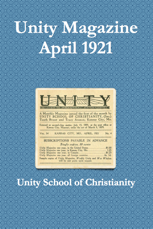 This April 1921 issue of Unity Magazine provides a snapshot of the spirit of the Unity movement when Unity was entering its heyday. Why did Unity grow so rapidly during the 1920s?

It may be The Unity Statement of Faith, first published here, that provided the foundation for Unity's growth for the next sixty years. Written by Charles Fillmore, these thirty-two statements convey the spiritual laws upon which Unity is based. On page 307, Charles writes:

We may change our minds tomorrow on some of the points, and if we do, we shall feel free to make a new statement of faith in harmony with the new viewpoint. However, we are assured there will be no change in fundamentals ...