Last week I asked you to consider What Are We? I did not say so at the time, but it was the first of a two-part series on what we are as the Unity movement. I had five suggestions. They are:

Sacred Canopy. A sacred canopy (borrowing a term from Peter Berger) is a religious movement that provides a common shared vision or the experience of God. This vision or experience is what Avery Dulles would call the “bonds of union” of people under the canopy.

Community of Faith. A community of faith is what we typically know as a church, a gathering of people with identifiable spiritual needs. The “bonds of union” for communities of faith are the specific unmet needs and preferences of members of the community or denomination.

Center of Practice. A center of practice or club, or more pejoratively, a “coven” is a group which assembles for the purpose of practicing a spiritual or religious faith. So the “bonds of union” is a common religious practice.

Audience Cult. An audience cult is a group of people who comprise an audience for some innovative and interesting belief or practice. The “bonds of union” of cults and audience cults are the common “interest” among its practitioners and audience.

This week I will try to answer What are we? with a clear vision of What We Are. Hopefully this will help clear some concern about how we operate in Unity and how we may answer the often-asked question, What is Unity? 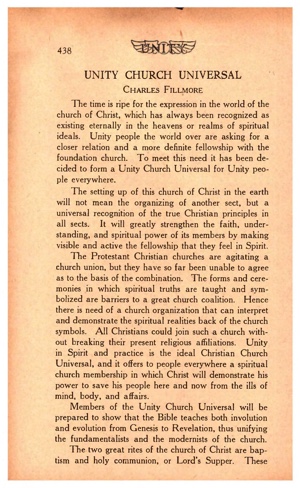 We are, spiritually, a Sacred Canopy. Unity, as a movement, is what Charles Fillmore declared in 1924 to be the “Unity Church Universal.” Click on the image to open this two page announcement and you will read that he was being pressured to form a closer relationship with the Protestant Christian churches. He couldn't do that without becoming, like them, a denomination, something he was extremely resistant to do, as will be shown further down.

The issue of the era was whether one was aligned with the fundamentalists or the modernists. It may be a surprise to many today, but Charles Fillmore was no modernist. So Charles Fillmore did what people have always done to dodge theological difficulties; he spiritualized the church, abstracting it into an etherial level where denominational issues no longer exist. The church he established was not a denomination, but rather a Sacred Canopy.

The Sacred Canopy did two things. First, it sought to bring together a Protestant church that was grasping for anything that could heal their divisions. Charles Fillmore wrote, “Members of the Unity Church Universal will be prepared to show that the Bible teaches both involution and evolution from Genesis to Revelation, thus unifying the fundamentalists and the modernists of the church.” Second, it established Unity’s place in the ecclesiastical order of things. Charles continued,

there is need of a church organization that can interpret and demonstrate the spiritual realities back of the church symbols. All Christians could join such a church with out breaking their present religious affiliations. Unity in Spirit and practice is the ideal Christian Church Universal, and it offers to people everywhere a spiritual church membership in which Christ will demonstrate his power to save his people here and now from the ills of mind, body, and affairs.

In other words, if Unity Church Universal was the Sacred Canopy, then the Unity School of Christianity was its primary Center of Practice. The Sacred Canopy continues to exist today in the minds of many people, particularly those who enter a Unity church and declare that they at last “feel at home.”

We are also, doctrinally and institutionally, two things:

Let me take these points in reverse order. We get into trouble when we mix up our Center of Practice with the audience cult. Unity often refers to itself as Practical Christianity, meaning that its members practice Christianity. Like any practice, it is easy to become distracted and we should not allow that to happen by, as Emilie Cady cautioned, reading too many books. These distractions are interesting and they may inform our practice, but they have come into our Unity churches because they typically do not have the spiritual depth to form their own organizations. The Fillmore teachings had the depth to shift from publications to form centers of practice and we should be cautious about the depth of other teachings that find themselves homeless.

We also get into trouble when we mix up our Community of Faith with the sectarian cause. We see this happening in Unity two ways today. First, we have become a home for many who are alienated from mainstream Christianity. If that is you, then know that you are welcome, but in order to truly benefit from the new Community of Faith that you have found, you need to let go of your previous experience of alienation.

Second, the prophetic voice of sectarian cause has its place in our spiritual life, but it is no substitute for a faith community. We are uniquely equipped for the work of social justice by our teaching on the power of the word. But what empowers our work for a just and peaceful society is not politics or sectarian cause but rather the community of faith. What I see in Unity today is not a lack of social justice but rather a lack of faith. I am amazed by those who think that Charles Fillmore never got political. He resisted war and he preached on social responsibility. My suggestion for those who are moved to be social activists is to be a student of truth “for the long haul.” A good example of what that means is how Daniel Berrigan was rooted in his Jesuit faith. It is possible to be on the front lines of social activism without alienating your entire faith community. And, as Berrigan knew, it is our rootedness in our faith community that enables us to do so for the long haul.

Finally, we get into trouble when we mix up our Center of Practice with our Community of Faith. Neal Vahle has an extensive history entitled “Unity: A School for Spiritual Education or a Religious Denomination?” in his book The Unity Movement: It’s Evolution and Spiritual Teachings (pp. 351-63). These dozen or so pages describe Charles Fillmore’s declaration of the Unity Church Universal, described above, and his concern about Unity becoming a denomination. Vahle quotes Charles Fillmore, from September 1943, a time when he could see the fruit his and Myrtle’s lifelong work:

The Lord came to me in a dream and outlined the ideas for this work. I was told not to form a church, but a school that would teach all people regardless of their religions. I was given the name “Unity” and told plainly that Unity was not a sect, nor a church and that if we wanted to teach persons we must not allow it to become sectarian. These were the principles taught by Jesus Christ. We should therefore be careful not to draw ourselves apart into an exclusive group. If we call ourselves a denomination we immediately cut off the opportunity to serve other organizations. Ours is a spiritual church and our purpose is to establish the true church in the minds and hearts of men.

Having said that, Charles Fillmore continued to ordain ministers and he did not shun the Unity churches in his retirement. He lived with the ambiguity of plural institutions, working side by side, one a school of practical Christianity, the other an association of ministers with field ministries. We can do the same.

Beyond the question of What are we? and our views of What we are, is the more important question, Is Unity relevant today? Here is why I think it is so.

Last week I visited Barnes & Noble in my city, a suburb of Baltimore. I found five racks devoted to primarily mainstream and evangelical Christian books and three racks devoted to what is typically known as “metaphysical books.” That proportion of metaphysical books compared to orthodox books, in my opinion, is a good indication of what has been true for two millennia – approximately 35-40% of the “religious” population (those who seek spiritual resources and are free to do so privately, without social stigma) look to some form of metaphysical teaching for their spiritual nourishment. They are not looking for a school, nor a denomination, and they have left behind the desire for interesting ideas and social justice. They are looking for a Sacred Canopy.

Download an academic essay on The Five Models of Metaphysical Christianity