In 1891 Annie Elizabeth Rix married Paul Militz in Chicago. She was 36 years old, Paul was 37. She and Charles and Myrtle Fillmore were ordained that same year by Emma Curtis Hopkins. The four must have been friends. The photographs shown here of Annie and Paul Militz are from the Unity Archives. I wonder if they double dated with the Fillmores.

Annie Rix Militz was a key figure in the formative years of Unity, from 1893 until 1910, when she left to form the Homes of Truth. Annie died in 1924 and Paul, residing at their Home of Truth in Alemeda, California, died a few years later.

This resource is text and PDF of six pamphlets entitled Generation and Regeneration published by Annie Rix Militz (d. 1924) in which she puts forth “a course of lessons for advancement in the spiritual life.” The problem, as she sees it, is

From the moment that a human being appears upon the earth, the question of sex is involved. ... throughout the whole life of a human being in the different stages, the matter of its sex is the most decisive and important issue at the beginning and ultimate of every marked era.

Her solution is sexual healing, beginning with relationships and “the organs of generation”—a healing which leads to “love’s awakening” and the attainment of a pure state of consciousness which she calls “the riches of virginity.”

Why would we have interest in reading a victorian era treatise about the spiritual benefits of celibate marriage? In my opinion there are three reasons.

First, many of us have placed too much of our happiness on sexuality. Too many of us already lead lives of celibacy or semi-celibacy, not for spiritual reasons, but rather because the obsession with sex has led to what Annie Rix Militz describes as The Great Disenchantment. The answers she provides won’t be for everyone, but they might provide insights for those who are not happy with their sexuality.

Second, many of us have given up on marriage, primarily over money or passion. All too often we look to divorce as the only answer. The prescription that Annie Rix Militz offers is not separation of the sexes but rather wholeness of the sexes, which leads to Love’s Awakening. Further, in a statement radical for her time, she says “this passion may not be for one of the opposite sex, but for one of the same sex as the one who loves, and the association and companionship can be as that which is between angels.” Annie Rix Militz provides at least a reference point for anyone who is looking for an alternative to divorce.

Third, and most important, Annie Rix Militz declares, “Virginity, like purity, is a state of mind and of heart.” In good Unity fashion, she declares that “Advancement in the Spiritual Life” “may exist even when the body has been violated. ... And though there have been sexual mistakes and people have lived in sexual indulgence for years, yet if the mind is pure and there is a complete turning away from the old life, the desire of one’s heart and the determined training of the mind out of the old lustful thinking, will result in that virginity of mind and heart which is one with the original purity of the Divine Self.”

A summary of Generation and Regeneration by Annie Rix Militz is given in the opening lesson, Right Generation:

Generation, briefly defined, is bringing forth after the flesh. Regeneration is bringing forth after the Spirit. As long as the flesh draws us and we feel that it is necessary to our manifestation we should have high, noble, pure ideals of marriage, and even when we have set aside the flesh as a necessity for our happiness and hold to the Spirit alone as the real substance which shall shine through this flesh, we should never despise the institution of marriage, but, like Paul, declare marriage is honorable in all, and to be kept free from sin or uncleanness in every way.

Annie Rix Militz and Ursula Gestefeld are two of New Thought’s great feminist writers, in my opinion. Interestingly, they both married German immigrants and they were contemporaries in Chicago. Most important, they have given us incredibly insightful metaphysical writings which are still relevant today.

I’ve uploaded two related resources: Some Problems Solved, a 1928 tract on celibate marriage and Maternity Treatments, a 1924 tract on affirmations to be held during nine months of pregnancy.

The health concerns may have diminished, but the psychological and spiritual concerns of sex and marriage are perhaps more complex now than in the earlier age. I hope these lessons will be helpful to us as we navigate new understandings of sex, gender and marriage. 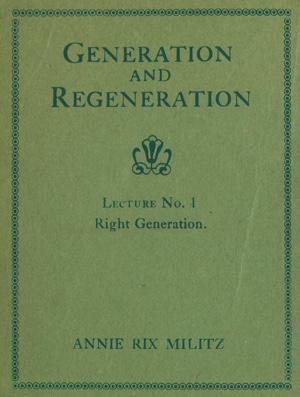 Download PDF of Generation and Regeneration by Annie Rix Militz

In January 1984, Leola J. Poole (ordained Unity 1984, d. 2010) wrote a summary of this work and compared it to the teachings of Charles Fillmore. She wrote, “My study of Annie Rix Militz is based primarily on her writing, Generation and Regeneration. It is interesting in the similarities of Annie and Charles Fillmore in their belief system and yet the difference in their approach on this subject.” Download PDF of Leola J Poole's study comparing Generation and Regeneration by Annie Rix Militz and Charles Fillmore's writings.