This is a placeholder for a future profile of Charles and Betty Lelly. If you knew the Lellys or if you have recollections of their ministry, be sure to leave a comment or email mark (at) truthunity (dot) net. I'll be happy to incorporate your recollections on this page. Here is what we have from an Internet archive of their former website:

Charles Lelly has made the search for spiritual awareness and mystical experience his life long journey. Though raised in a traditional Christian family, he found the need to study beyond those religious boundaries. His university education was directed toward science. He earned a B.Sc. degree in pharmacy. However, as a Registered Pharmacist he again found the boundaries too narrow and after ten years as a retail pharmacist, he again sought out new avenues for his basic spiritual interest and went to the Unity School of Ministerial Training and became an ordained Unity Minister in 1968.

He remained at Unity Headquarters as editor of New Magazine, later rising to an executive position. He began writing a series of essays for Unity Magazine entitled The Beautiful Way of Life. In l980 Unity published many of these articles as a book. (Now out of print). During this time, Lelly sought for and caught glimpses of the great inner power we all possess. In addition to the Unity teachings, he studied other spiritual and mystical teachings, such as Rosicruianism, Self-Realization (Yogananda), Zen Buddhism, Sufism, Hinduism, and Taoism. He was, and still is, inspired by the writings of Dr. Walter and Lao Russell.

In l978 Lelly moved to Kentucky to become the senior minister of Unity in Louisville. He is now retired, continuing to write. He continues to study any avenue that brings into balance the nature of spirituality and science.

Betty Lelly was associated for twenty years with the Silent Unity prayer ministry of the Unity School of Christianity, Unity Village, Missouri. Betty is a Licensed Unity Couselor/Teacher and Ordained Unity Minister. When her husband, Charles Lelly, left Unity School to go into field ministry she accompanied him to Unity of Pensacola, Florida and later to Unity of Louisville, Kentucky, in 1978. When her husband retired in 1986 she became the Senior Minister. Betty wrote and presented the meditations for all the talks given at every service. Betty’s major role in field ministries was spiritual counselling. She always had a full schedule. Betty has always been an editorial advisor for Charles and they have always worked closely together in every avenue of service.

CHARLES LELLY served at Unity Village Headquarters for nine years—seven of which he was an Editor for Unity Publications. He is author of the the Unity book, The Beautiful Way of Life. Charles shares techniques for restoring a dynamic balance of living. He stresses individual fulfillment and spiritual unfoldment. His emphasis is on acquiring knowledge of the whole person—body, soul, mind. His sharing will delight you. 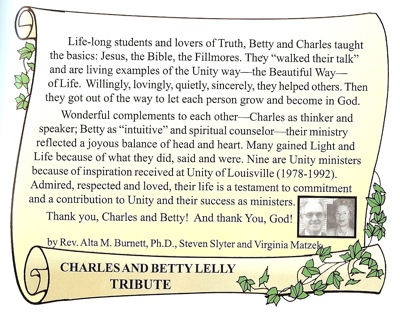 Life-long students and lovers of Truth, Betty and Charles taught the basics: Jesus, the Bible, the Fillmores. They “walked their talk” and are living examples of the Unity way—the Beautiful Way—of Life. Willingly, lovingly, quietly, sincerely, they helped others. Then they got out of the way to let each person grow and become in God.

Wonderful complements to each other—Charles as thinker and speaker; Betty as “intuitive” and spiritual counselor—their ministry reflected a joyous balance of head and heart. Many gained Light and Life because of what they did, said and were. Nine are Unity ministers because of inspiration received at Unity of Louisville (1978-1992).

Admired, respected and loved, their life is a testament to commitment and a contribution to Unity and their success as ministers.

Thank you Charles and Betty! And thank You, God!