Therefore although it be good and profitable that we should ask, and learn and know, what good and holy men have wrought and suffered ... yet it were a thousand times better that we should in ourselves learn and perceive and understand, who we are, how and what our own life is, what God is and is doing in us, what He will have from us, and to what ends He will or will not make use of us.

The first passage discusses sin without any mention of evil. The second passage explicitly states that healing occurs as man is made divine. The third passage describes Eternal Good manifesting in you and I. And the fourth passage says it is a thousand times better to know ourselves than to study the sufferings of others.

This was a trick question. All four are from Unity literature. The first two are from Unity magazine of June 1918, published exactly 100 years ago. The second two are lengthy passages in Emilie Cady’s seminal essay, Finding The Christ In Ourselves. And I say seminal because it was that essay which brought Emilie Cady to the attention of Myrtle Fillmore, who then passed it on to Charles. It is the first and primary essay in Miscellaneous Writings, the collection of her most important essays and it may be the most often reprinted Unity tract.

But all four of them are excerpts of direct quotes from well respected Christian literature. The Unity literature has directly quoted from chapters 2, 3, 6 and 9 of Theologia Germanica, a Roman Catholic book written around 1350 AD. Links to these chapters and a PDF of the edition that Emilie Cady likely read are here on TruthUnity.

As said, it was a Roman Catholic book from the 14th century. It came out of a religious community called “The Friends of God”, “a midieval mystical group of both ecclesiastical and lay persons within the Catholic Church and a center of German mysticism” (Wikipedia). The book was unknown until Martin Luther discovered it and published it as Theologia Germanica. Here is what he said:

Next to the Bible and St. Augustine, no book has ever come into my hands from which I have learned more of God and Christ, and man and all things that are.

Scholars agree that this book bridges Roman Catholicism and Protestantism. But is is also fair to say that this book, at least the four chapters I've quoted above, bridges Christianity and Unity.

This is my answer to anyone who tries to claim that Unity is not Christian. For those who sense that Unity teachings bring them into an awareness of a presence of God, this book is, figuratively, the smoking gun. Without it Emilie Cady might not have written Finding The Christ In Ourselves, or at least in the same way. Without it, the Unity magazine issue of 100 years ago might not have had its wonderful essay Practical Christianity. And without it, Eric Butterworth might not have come to his understanding of the power within you. As for the last point, let me explain what I mean.

If you listen to these audio clips of Eric Butterworth, you will know what I mean. “God asks only one thing of you—to let God be God in You” ... “I could have never written Discover the Power Within You without this concept” ... “The Eternal is forever begetting the only begotten.” I suspect that the reason Eric Butterworth quotes passages like these from Eckhart instead of from Theologia Germanica is because Eckhart’s writings are scholastic theology, whereas Theologia Germanica is mystical, devotional literature.

A scholarly English translation of Theologia Germanica was done in 1850 and a popular edition of that translation was published in New York by Macmillan in 1893. It is likely that this was the edition that Emilie Cady read. I got a copy of the 1907 reprinting and created a PDF for you to download below. Another nice download is in the Christian Classics Ethereal Library. For my own reading and personal study, I bought a modern English edition from Scriptoria Books, which I recommend to anyone who wants to dive deep into the text.

I hope this post and these resources bless you today. 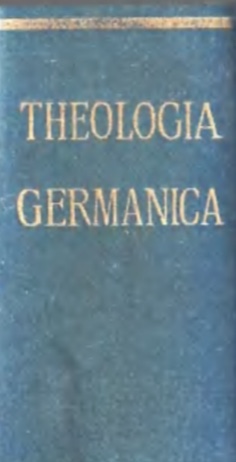 EDITED BY DR. PEIFFER FROM THE ONLY COMPLETE MANUSCRIPT YET KNOWN

Translated from the German by Susanna Winkworth

With a Preface by the Rev. Charles Kingsley
Rector of Eversley,
and a Letter to the Translator by the Chevalier Bunsen, D.D., D.C.L., etc.

First published as a volume of the Golden Treasury Series in 1874.
New Edition 1893