The Anniversary Celebration in 1991 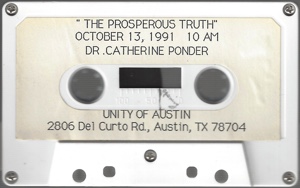 In October 1991, Catherine Ponder was invited back to Austin to speak at the 30th anniversary of the church she had founded in 1961, Unity Church of Austin. This audio is from the Sunday service. The title of her talk is The Prosperous Truth and in that talk she shares many stories about her founding of the church, her affection for Austin and her gratitude for those who participated with her. One gets a sense of her gracious nature toward people and circumstances and the determined focus she brings to the study of prosperity. 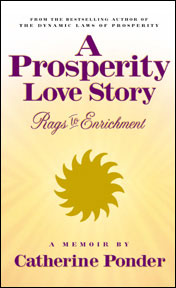 As for the church Kelly Ponder and I founded in 1961, I returned to it in 1991 for a Thirtieth Anniversary celebration. The minister there graciously arranged for a festive banquet and my Sunday morning talk to be held in a local hotel ballroom.

People came from near and far for the weekend. Austin had grown so much that I could no longer see the University tower or the dome of the State Capitol from my rooms high atop our hotel. Too many tall buildings had been erected in between. But any small disappointments about the changed skyline were more than balanced out by the estimated one thousand people who later crowded into the ballroom. The audience loved learning that the founding of Unity of Austin had been based on a love story.

All that Kelly Ponder, his study group, and our later Unity of Austin congregation prayed for and pictured had come true. Today there is not just one, but there are several Unity groups in the Capitol City. Religious Science is represented there as well. And other similar groups meet nearby. Indeed, Kelly's and my love story—in the form of inspirational thinking—continues today to grow in the heart of Texas.

A personal note: I live in Austin, and at one time I worked downtown in a building which was the old post office. During lunch breaks, I would often walk a few blocks where the former Commodore Perry Hotel was located. It is now condominiums, called the Brazos Place.

I also am a graduate of the University of Texas at Austin. The building which housed the English department still stands in what is called the "six pack." It was there that Kelly Ponder worked as an English professor.

It is easy to have a sense of Austin in former days, before it grew to the large city it is now. Austin is prosperous, very prosperous. But it has achieved its prosperity in a dignified and gentle way. Walking around in this city, downtown and on the 40 acres of the UTexas campus, gives a sense of the Austin that Catherine Ponder knew. I like to think that she deserves credit for helping to guide people in this the wonderful city of Austin that we know today.