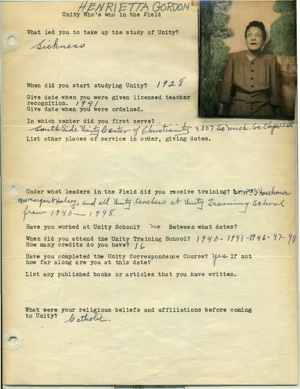 Here is the 1948 Field Department Survey for Henrietta Gorden, who became a Licensed Unity Teacher in 1941 and an Ordained Unity Minister in 1953. I believe that she became the first ordained minister of South Side Unity Center in Chicago in 1953 and remained its minister until her passing in 1963. She is listed as the minister in the 1956 Unity Annual Conference Yearbook.

If the above is correct, then Henrietta Gorden would have been the pastor when Johnnie Coleman began her own study of Unity in the 1950s.

Henrietta Gorden began her study of Unity in 1928 while suffering from a nervous breakdown and a partial paralytic stroke. She was healed by the prayers of Silent Unity and her own faith and obedience to their instructions.

She continued her study with William Hoschouer and Margaret Halsey in Chicago and earned 16 credits at the Unity Training School from 1940 through 1948. She also completed the Unity Correspondence Course.

In 1943 she encountered another healing challenge. She wrote,

In 1943 I started putting on weight and began to be unable to hold my eyes open as they were affected by the previous paralysis [in 1928]. Doctors of all kinds aid I would never be able to open them again. I grew heavier and heavier and seemed unable to walk any distance or up and down stairs. In 1945, growing uneasy at my condition, I started really to find God and perfection for myself, as I had Silent Unity and everyone I knew praying for me.

In the Silence one night, I was instructed to make a treasure map of the things I wanted, this I did in 1945. I put on it a pair of wide open eyes and a slender body among other things. It was not until 1947 in December that it worked out, but I now can see, my eyes are wide open and I have lost 50 lbs in weight to the astonishment of the eye specialists and my friends. I can run and jump now and not get tired. Everyone says I look ten years younger and I certainly feel that way. I thank God every day for His wonderful healing when man said it could not be done.