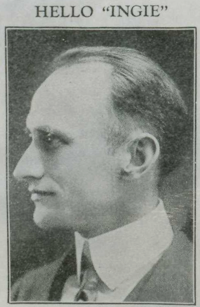 ALMOST ALL of us at Unity Headquarters called E. V. Ingraham "Ingie." He was one of Unity's most colorful leaders. Of medium height, slight build, with black hair, emphatic black eyebrows and sideburns, coupled with an olive complexion, there was, I thought, a suggestion of an oriental background in his countenance.

Although I never knew Ingie as well as some of the other early leaders, similarities and contrasts established links.

"Do you and Mr. Ingraham belong to a secret order?" an ardent student asked me.
"What makes you think so?" I countered.
"You wear identical blue zircon rings," she commented.

She was more observant than we were. Ingie laughed when I shared the speculation with him. "That's not the only peculiarity about us. We even share the same given name!" None of us had known his first name was Ernest.

Ingie joined the staff at Unity School in 1919 and organized the Sales department, created to supply Unity literature at wholesale rates to Unity centers for resale. By the time I joined the staff in 1927 he had become head of the Field department, and Douglas DeVorss (who later established the DeVorss Publishing Company in Los Angeles) headed the Sales. 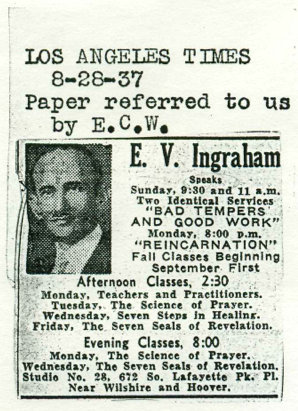 The Field department formed a link between the School and the many groups in this country and abroad who liked to meet to study Unity teachings and compare their experiences in putting them into practice. Such groups were started primarily by housewives who wanted their families to be reared as they themselves had not been in Unity's way of life.

The Field department was an effort to establish some guidelines so that what was offered in the centers would reflect what the Fillmores taught at Headquarters.

Ingie, though effective as an inspirational speaker, was essentially a teacher, at his best in class instruction and in writing, as evidenced by his still popular little book, "The Silence." Before long, he left Headquarters to establish a local ministry in Florida, which was experiencing a real estate boom. He became involved in real estate transactions, a paper millionaire until the crash in 1929, when along with thousands of others he lost his holdings and returned to resume a teaching assignment at Headquarters. For a short while he and H. B. Jeffrey assisted May Rowland in Silent Unity before resuming individual leadership in the field.

Word has been received that the Reverend E. V. Ingraham made his transition to another expression of God's infinite life on August 20, 1978.

It was in 1919, that E. V. Ingraham organized the Unity Sales Department--it was created for the purpose of supplying Unity literature at wholesale prices to Unity centers for resale.

In 1931, the Unity Training School was organized, and Mr. Ingraham was placed in charge of the first training class held at Unity Farm. He was with Unity as a worker and field lecturer from 1928 through 1935. He left Unity in 1935.

For the next ten years he worked independently, continuing his research work into the teachings of ancient and modern religions. For three years he taught at the Institute of Religious Science in Los Angeles. Until his retirement in 1959, he was minister of the Progressive New Thought Center, Cincinnati, Ohio, of which he was also founder.

We extend special blessings of love and God-speed to Unity's friend, E. V. Ingraham, as he has completed his 94th year on this earth plane and goes on to the next stage of his eternal growing.