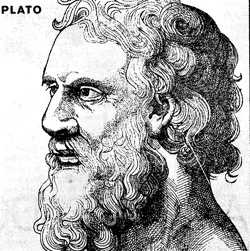 Most of us have heard of Socrates, Plato and Aristotle. Socrates taught Plato, Plato taught Aristotle and Aristotle taught Alexander the Great, who conquered nearly all of the known civilized world and caused the spread of Greek philosophy to the middle east. This influence of Greek thought is known as hellenism and it is important to know that the environment in which Christianity spread was hellenist. While the apostle Paul traveled in Roman territory and chose to speak in Jewish circles, the cultural environment was hellenist and the ideas we get from Plato were present in early Christian circles.

We can thank Plato when a prayer chaplain says “I see you whole, healthy and perfect.” How can this be said when my physical body is obviously less than perfect? It is so because my essential nature is in fact perfect, but is being expressed as something less. There is an ideal which is perfect and that ideal is what Plato called a form. As explained by David Branch of St. Anselm College (Branch, 2009, Plato's Theory of Forms), Plato tried to solve the problem of living a fulfilling, happy life in a world that always changes and ultimately takes away everything that I come to love and cherish, such as my body.

The forms are the archetypes or perfect models for all of the properties that are present in material objects. The forms are the perfect examples of the properties they instantiate. The form of roundness, for example, is the perfect model of roundness. All round material objects are merely copies or imitations of this most real form. Thus it is the forms that are ultimately real.

In virtue of the fact that all objects in this world are copies of the forms, the forms are the causes of all that exists in this world. And, since humans have access to the world of forms through the mind, we have the capacity to cause the expression of a pure form into the manifest realm.