This material was prepared for the Correspondence School Department by Herbert J. Hunt, Dean of Bible Studies for the Unity School of Christianity. Doctor Hunt, whose classes in Bible are eagerly attended by ministerial students, teacher-counsellor trainees, and others, brings to his teaching a rich background of experience both in the Unity ministry and at Unity School of Christianity. We are deeply appreciative of the contributions he has made and is making to the Unity educational program, and especially do we acknowledge the insight and understanding he has expressed in these correspondence lessons.

The purpose of this course of lessons is threefold: (1) to direct the students to read and study the books of the Bible, giving them a better understanding of events of the Bible as applied to individual unfoldment; (2) to furnish historical helps that shed light on the Bible text; and (3) to provide a key to the spiritual meaning of the Bible as interpreted by Unity. The course is by no means an exhaustive study of the New Testament, but it will familiarize students with the outstanding characters and teachings.

This course is in addition to the regular Unity Correspondence School Course and is not required of those training to be licensed Unity teachers. It will, however, be helpful to them and also to those who are now engaged in the Unity ministry. For students who are taking the regular Correspondence School Course, the New Testament Bible lessons will furnish a rich background. Both courses may be taken concurrently.

THE BIBLE. A Bible with a concordance, dictionary, and maps is recommended. No special edition or translation is required. Bible texts in the lessons are quoted from Nelson's Revised Edition of the American Standard Version, unless otherwise indicated. If the student chooses, this edition may be ordered from Unity School.

Though not required, the Metaphysical Bible Dictionary, printed by Unity, would be an invaluable reference book.

The policy of Unity is to place no price on its ministry. In compliance with the ideal and practice of this policy, the Correspondence School Department offers these lessons on a freewill offering basis.

To you as a student seeking knowledge of the Bible and understanding of the meaning it has for you today, these lessons are dedicated. As literature the Bible is among the world's greatest; as a source of spiritual inspiration its message is perpetually contemporary. Our prayer is that your study may take you forward in your search for enlightenment.

The plan of study for these lessons may be outlined as follows:

After reading through this Introduction, take up the first lesson, together with your New Testament, and then:

The Gospels are four in number, as follows:

While the gospel is attributed to John Mark, a disciple of Peter, most scholars today give a date of 70-75 CE by an unknown author who is writing to answer questions following the destruction of Jerusalem. (White 233).

Mark is the shortest and earliest of the Gospels, and was written about A.D. 65. Mark (or John Mark, as he is sometimes called) is mentioned in other parts of the New Testament, and was associated with Barnabas and Paul on their first missionary journey (Acts 13:5). Later on, Mark attached himself to Peter, as interpreter and secretary — see I Pet. 5:13. An early writer (about A.D. 140) gives the following information regarding the writing of Mark's Gospel:

"Mark, having become the interpreter of Peter, wrote down accurately everything that he remembered, without however recording in order what was either said or done by Christ. For neither did he hear the Lord, nor did he follow Him, but afterwards, as I said, attended Peter, who adapted his instructions to the needs of his hearers, but had no design of giving a connected account of the Lord's oracles (or words). So then Mark made no mistake while he thus wrote down some things as he remembered them; for he made it his one care not to omit anything that he heard, nor to set down any false statement therein" (Hastings, "Dictionary of the Bible," p. 579).

Mark's Gospel is written in a simple, straight-forward manner, and is notable for movement and dramatic effect in its descriptions. The word straight-way, for example, occurs about fifty times. Actually, what we have in this Gospel bears all the marks of an eyewitness account — and this eyewitness seems to have many of those characteristics that we usually associate with Peter.

Although some of the content of the Gospel of Matthew is unique to that book, most scholars do not find any evidence that it was compiled by the apostle Matthew and current scholarship dates the book ca 80-90 CE by an unknown author. (White 244).

Matthew's Gospel has several outstanding features. To begin with, we have here a firsthand account of many of the events recorded—since Matthew (sometimes called Levi) was an actual disciple of Jesus. (See Matt. 9:9 and Luke 5:27.) Then, the style of writing in this Gospel indicates that the writer was a well-educated man, and accustomed to the best forms of public address. There are indications that Matthew wrote down many of the actual sayings of Jesus—possibly at the time of utterance, or shortly thereafter—and that these "sayings," transcribed onto small slips of parchment or papyrus, circulated freely among the early Christians. However, around A.D. 70 Matthew, or someone closely associated with him, put these "sayings" into connected form, adding the circumstances surrounding and leading to them, together with other important information, and thus forming our present Gospel according to Matthew.

Matthew's Gospel seems to have been written especially for the Jewish Christians, and therefore it places emphasis upon the messiahship of Jesus. Indeed, the theme of this Gospel might be stated as: "Jesus, the Jewish Messiah." Matthew writes of Jesus as "King of the Jews"; shows that Jesus was connected with the royal line of David; and as a background for the birth of Jesus, he mentions kings, priests, wise men, and other exalted personages. Matthew makes frequent use of Old Testament quotations, and a characteristic phrase, repeated over and over again, is: "That it might be fulfilled." (See Matt. 1:22.)

Most scholars agree that the author of Luke/Acts was a gentile convert who was a follower of the teachings of Paul. But differences with Paul's letters and the two-source theory (see below) indicate that the books should be be dated ca. 90-100/110 CE by an unknown author. (White 252).

Luke was not a disciple of Jesus, but was a convert of the apostle Paul. Thus, the information contained in Luke's Gospel is not of the firsthand type found in Matthew. Luke's information came through the apostle Paul and other early leaders, and through personal research. The "preface" to Luke's Gospel (Luke 1:1-4) indicates how careful and painstaking Luke was in compiling his Gospel; and it would appear that some part of the material was personally gathered during the two years Luke spent in the vicinity of Jerusalem, while Paul was in prison there. (See Acts 23-26.) This would be around A.D. 57- 59—although the actual Gospel according to Luke was not completed and in circulation until around A.D. 70.

Luke, being himself a Gentile, wrote for Gentile Christians, and made his theme: "Jesus, the Saviour of Mankind." This universal viewpoint is readily recognized in "sending out the seventy" (Luke 10:1- 20), the parable of the Good Samaritan (Luke 10:25-37), and many other passages. Also, when telling of the birth of Jesus, Luke (in contrast with Matthew) uses as a background the humble shepherds and the overcrowded inn, with the birth taking place in the outbuildings of the inn. This does not mean that the stories in Matthew and Luke should be regarded as contradictory. Rather, they are complementary, and together they make one complete picture; for Jesus was both the Messiah of the Jews and also the Saviour of mankind. The Gospel of Luke is written in such an interesting and helpful way, and contains so much of what is often termed "the human touch," that it has been designated "the most beautiful book in the world."

The above three Gospels—Matthew, Mark, and Luke—are sometimes referred to as "the Synoptic Gospels"; and the student should become familiar with this term. The word synoptic, as here used, means "seeing from the same general viewpoint." In other words, the Gospels of Matthew, Mark, and Luke cover similar ground, and have much in common. However, there are also some differences—and it is these similarities and differences that give rise to what is known to New Testament students as "the synoptic problem." This problem may be briefly stated as follows: 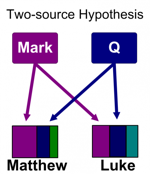 The "problem" is to find an explanation that will satisfactorily cover all the above points; and the suggested solution is briefly as follows:

The Gospel of John stands in a class by itself, and is sometimes referred to as "the Spiritual Gospel." This term should not be regarded as a reflection on the Synoptic Gospels, nor is there any suggestion that they are not of a "spiritual" nature. Rather, the term Spiritual is intended to indicate that there are several marked differences between John's Gospel and the Synoptic Gospels.

Thus, John's Gospel gives us not only the "facts" of Jesus' ministry, but also the interpretation of many of His teachings and activities. Indeed, the writer of this Gospel sums up the entire record of the life and teachings of Jesus Christ in a clear statement of purpose:

"These are written, that ye may believe that Jesus is the Christ, the Son of God; and that believing ye may have life in his name" (John 20:31).

We are now ready to take up the first regular lesson.